If you were stifling a yawn at work yesterday, chances are you were not alone.

By 4.30pm, sales on its platforms, including Lazada and AliExpress, had reached 213.5 billion yuan, topping its total sales for last year's event, a spokesman told The Straits Times.

Singapore ranked seventh in the top 10 territories buying from mainland Chinese vendors on Alibaba as of midday, behind the likes of Hong Kong, the United States and Malaysia.

Dresses, down jackets and other clothing items formed the top exports.

In Singapore, cashback platform ShopBack saw 250 per cent more unique users in the first hour of the day compared with last year, with Lazada, Shopee and Qoo10 making up the most popular merchants.

By 8am, ShopBack drove the same amount of traffic to partner merchants as it had for Singles' Day last year, it said. 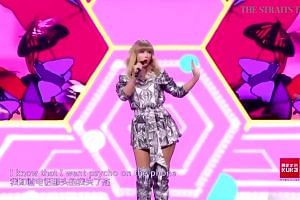 On Qoo10, orders and sales in the first hour were five times more than last year's. Babycare, electronics and beauty were among the top-selling categories, it said, adding that the online marketplace is projecting a sales increase of up to 20 per cent for this year's event.

Lazada and Shopee both saw three times the orders by 1am than they did last year.

"Besides popular products such as electronics, smartphones and beauty items, groceries has risen to become one of the best-selling categories," he said.

The most expensive item sold on Lazada as of 3pm was a $8,999 bottle of Hibiki 30 Year Old whisky, added Mr Chang.

Amazon, which launched its local site last month, said it is "happy with the feedback we have seen so far and will continue to focus on serving our customers, not on sales numbers".

Associate Professor Chu Junhong of the National University of Singapore Business School noted that "while China's economy is reportedly not doing well, it does not seem to affect Chinese consumers' buying".

For some merchants, sales for the day can form up to half of their full-year sales, she added.

Nanyang Polytechnic's School of Business Management director Esther Ho said retailers may have offered larger discounts this year "to increase sales ahead of the tariff impact from the US-China trade war".

Housewife Jessie Foo, 32, said she stayed up until 3am to scoop up discounts on baby products and browse the hourly deals offered by sites like Shopee.

She spent about $400 on diapers, toys and facial products.

"I stocked up on the things I usually buy since it's a lot cheaper and got my Christmas shopping done. It may seem a bit extreme to shop at midnight but if you wait, they might sell out," she said.