SINGAPORE - A 40-year old Singaporean man, who wanted to travel to Syria to join terrorist group Islamic State in Iraq and Syria (ISIS), was detained under the Internal Security Act.

He was among three people picked up recently under the Act. The other two include a 62-year-old woman and a 39-year-old man, who have both been placed under restriction orders, which require them to undergo counselling and seek government approval before changing jobs or address, or going abroad, among other things.

The Ministry of Home Affairs said in a statement that Imran Mahmood, who is unemployed, was detained in January. His radicalisation began some time in 2013, when he started listening to the lectures of foreign religious preachers online, including those who preached about the imminent coming of the end-times, said MHA.

He became a strong supporter of the violent objectives and actions of ISIS, and by 2014 had wanted to live under the group’s so-called caliphate in Syria and Iraq.

MHA said he looked into ways to get to Syria and was also willing to take up arms to defend or expand ISIS’s territory.

He believed that he would achieve martyrdom if he died fighting for the terrorist group, added the ministry.

However, Imran started to question ISIS’s legitimacy in 2017, when the group started to suffer territorial losses. But he did not denounce the group and “continued to believe that it was his religious duty to fight alongside any group trying to establish a rightful caliphate in Syria, and that his radical views were legitimate”, said MHA. 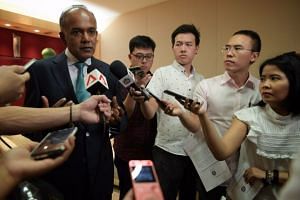 Restriction Order issued under ISA: Govt will act against anyone who threatens society, says Shanmugam

He was also prepared to join militant and terrorist groups involved in the Syrian conflict, such as the Free Syrian Army and Hayat Tahrir Al-Sham, an Al-Qaeda aligned faction, added MHA.

Meanwhile, two Singaporeans were placed on restriction orders in March.

One of them, Rasidah Mazlan, 62, had been in contact with multiple foreigners suspected of involvement in terrorism-related activities, including individuals who had expressed support for ISIS. She is believed to be among the oldest people to have been dealt with under the ISA over terrorism-related issues.

The production assistant was issued with a restriction order in March this year, which requires her to undergo counselling and seek government approval before changing jobs or address, or going abroad, among other things. Investigations showed that her contacts with the foreign individuals were mainly driven by her deep sympathy for Muslims suffering in overseas conflicts, said the MHA.

“Her indiscriminate online activity rendered her vulnerable to adverse influence and recruitment by terrorist elements who pose a threat to Singapore,” added MHA.

The other person placed on a restriction order in March was Mohamad Fairuz Junaidi, 39.

Investigations found that the deliveryman was influenced by ISIS’s radical ideology and had considered travelling to Syria to join the terrorist group, said the MHA.

“Fairuz was emotionally affected by reports on the killing of Sunni Muslims in the Syrian civil war. He considered travelling to Syria to join ISIS and was prepared to take up arms and fight alongside ISIS. He believed that he would be a martyr if he died while doing so. He also refused to believe mainstream media reporting about ISIS’s atrocities, and saw them as fabrications to discredit the terrorist group,” added the ministry.

But he started to have doubts about ISIS’ legitimacy in 2017 after he read negative reports about the group on Facebook and was also swayed by criticisms about the group, the MHA said. He will undergo counselling and rehabilitation.

The ministry also announced the release of four Singaporeans from detention with restrictions in March and June. The restriction order issued against another Singaporean was also allowed to lapse.

The four Singaporean ISA detainees had shown good progress in their rehabilitation and assessed to no longer pose a security threat that requires preventive detention, said MHA.

Abd Rahim’s detention was suspended with a suspension direction in March, while Asyrani was released on a restriction order when his order of detention expired in March.

Meanwhile, Izzah and Khairul were both released on restriction orders when their orders of detention expired in June.

Separately, the restriction order issued against a 17-year-old Singaporean in June 2015 was allowed to lapse in June, after he showed good progress in his rehabilitation, said MHA.

Commenting on the latest detention and restriction orders on a Facebook post, Minister-in-charge of Muslim Affairs Masagos Zulkifli said: “These cases illustrate that there will always be those who are vulnerable to radicalisation and our vigilance against it is a continuing one.”

He added that such arrests are “few and far in between” because the Islamic Religious Council of Singapore (Muis) and the authorities work closely together.

He also urged the Malay/Muslim community to help the four released detainees to reintegrate into society and to continue to look out and care for one another.

“We must not allow the actions of a misguided few to overshadow the achievements of our community. Our Malay/Muslim community stands united and strong with fellow Singaporeans to keep our nation safe and secure,” he said.

Muis, in a statement, said: "The community rejects any notion of exclusivist and extremist teachings in our midst and are on guard against them."

The latest cases highlighted the continued threat of self-radicalisation, especially when people do not verify the information they access online and fall prey to radical propaganda that exploit geo-political conflicts to boost their appeal, Muis pointed out.

"Such dangers are still prevalent online, even after extremist groups are physically defeated," it said.

Muis added that it has stepped up both its online and offline engagements, such as the Asatizah Youth Network and publications such as the Contemporary Irsyad Series, which gives religious guidance on emerging issues.

Senior Parliamentary Secretary for Home Affairs Amrin Amin, in a Facebook post, said the release of the four detainees shows that timely intervention from the authorities and support from family and community are critical in helping to rehabilitate those who become radicalised.

He added of the three latest arrests: “I condemn their acts. They are a sobering reminder of the serious threats of radicalisation.

“Singaporeans know that Muslim Singaporeans reject terrorism and extremism. We have to make sure the conduct of a disgraceful few does not tar the whole community.”