A staggering 15.4 million journeys are made daily in Singapore. This first instalment of the "Better Journeys" series explores how commuters are adapting to new ways of getting around.

A flying taxi made headlines recently at the Consumer Electronics Show in Las Vegas, giving the world a glimpse of public transport in the future.

These new modes of transport are aimed at providing commuters with more choices. Paired with the existing public transportation network, they make everyday journeys faster and more efficient.

Mr Lim Kell Jay, head of Grab Singapore, the private operator with the widest range of travel modes, says: “Commuters are already using various shared mobility services daily. However, there are still not enough options in between mass transit services, and taxis or private-hire cars. While many appreciate the comfort of the latter, they have also asked for more affordable options. We are taking the challenge to fill this gap by introducing more innovative services priced for daily use.”

Underpinning this evolution is the Land Transport Master Plan (LTMP) 2040 vision of a car-lite Singapore. It imagines a future where nine out of 10 peak-hour journeys will involve walking, cycling, and other car-lite means, and that nine in 10 of these will be completed in 45 minutes or less.

While travel preferences are personal, the end goal is the same – to arrive at the destination safely, quickly, and at a fair price.

The public and private transportation sectors are working together to expand commuting options, as the LTMP panel continues to crowdsource ideas and feedback.

“As Singapore works towards a car-lite society, commuters will want to choose between different travelling services from both public and private operators, and combine or switch among them seamlessly based on their individual requirements,” says Mr Lim.

With less land devoted to roads, spaces for greenery and community facilities can increase, improving the quality of life.

Shorter commutes free up more time for rest. As shared transport services continue to evolve and improve, we look at how three Singaporeans commute daily.

At 7.25am every weekday, Madam Nikki Safian leaves her Yishun home and walks to the nearest bus stop. She boards an SBS Transit feeder bus and alights six stops later. There, she buys breakfast, and waits for the 23-seater GrabShuttle that will take her from Yishun Ring Road to Depot Road, where she works.

On her return trip, the shuttle drops her at a bus stop close to her block and she walks home.

During her 42-minute commute, Madam Nikki meditates in the morning, and plays mobile games in the evening.

The 54-year-old assistant producer says: “I have a seat guaranteed. And I see the same faces, which I find comforting.”

Madam Nikki started taking this route three months ago when she switched jobs. She spends about $200 monthly travelling to and from work. She used to spend $700 monthly in her previous job, commuting between Yishun and one-north by taxi and carpooling.

“There is a jam on the CTE on some mornings, but I no longer have to worry about the cost unless I’m in a taxi,” she says.

On days when she is late, she carpools but travels along the inner roads to avoid the ERP. She does not take the MRT to work as the journey would involve one feeder bus, two train lines, long walks through interchanges and a cab ride – all of which is too stressful for her and her bad left knee.

“I’m kiasu and try to book my seats a week in advance. If I can’t get a seat or am running late, I do feel a bit stressed,” she admits.

But that is a small price to pay compared to the $500 she saves every month, which now goes to her pilgrimage fund. “It’s my dream to go on a holy pilgrimage.”

The speed of life has changed at the National University of Singapore (NUS), as students zip up and down the campus pathways on green e-scooters.

For first-year Business student Xavier Liew, the change has been positive. The 23-year-old was among the first to sign up for the GrabWheels e-scooter beta programme when it was launched on Nov 19.

“It has really made commuting around campus easier and faster,” he says. “Some nights, we just scoot around school for fun – it has changed campus life for me.”

The part-time sales strategy executive regularly scoots from his residence in Raffles Hall to University Town, the football field, the library, supper spots, and to the Kent Ridge interchange, where he catches bus service 10 to his office in the Central Business District once a week.

Before the GrabWheels service was introduced, he got around campus either by walking or taking the university shuttle. And since the free shuttle service is the primary mode of transport for NUS students, they are usually packed during peak hours, which sometimes means another 10-minute wait for the next shuttle. The shuttle service ends at 11pm. 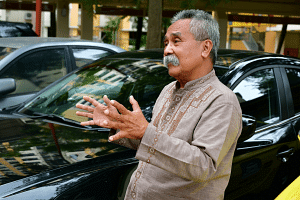 Driving me crazy: A day in the life of a driver

A Grab spokesman says NUS students have scooted over 40,000km in less than a month, with usage expected to grow exponentially as the new school term begins. Trips begin and end at any of the GrabWheels parking lots at key gathering points throughout the campus.

A new Land Transport Authority regulation, which limits the speed of bicycles and personal mobility devices to 10kmh (down from the current 15kmh) on footpaths, kicks in on Friday. Whether this reduced speed limit will affect the popularity of scooting remains to be seen.

Ms Paula D’Cruz, 58, used to get an earful from taxi drivers when they picked her up from her condominium in Marine Parade. Due to an old-fashioned gantry design, drivers have to remove their cash card to tap on the sensor before they can enter the compound.

But all that changed when she started commuting by ride-hailing.

“The younger drivers don’t fuss about having to tap their cards first to enter the compound.”

The part-time sub-editor usually leaves her home at 10am. Because she travels off-peak, her ride-hailing fare is slightly cheaper, at $12.

Although her husband’s car is sometimes available, she prefers not to drive to work. “I’d have to worry about parking, and there’s always a jam on the PIE on the way home. I’d rather have someone drive me, especially after a long day at work.”

Promptness and convenience are why Ms D’Cruz chooses this mode of commuting, even if it is costlier than other modes.

On the upcoming Thomson-East Coast MRT line, she says: “I don’t see it benefiting me much. The nearest interchange in the direction of the city from Marine Terrace station is Marina Bay. Unless I have a lot of time on my hands, I’ll still be relying on a car for point-to-point journeys.”