The labour movement is expanding the scope of its role by opening up its activities and services to non-union members, in a move to look after the interests and welfare of as many workers as possible.

This means non-members can, for instance, attend training courses on a "pay per use" basis, instead of first having to be a union member and pay monthly dues to use a range of services.

This new model, labour chief Chan Chun Sing said yesterday, will give the National Trades Union Congress (NTUC) greater flexibility in representing the Singapore workforce at a time when technology is disrupting the marketplace and changing the nature of employment.

The "pay per use" model is available to workers in small and medium-sized enterprises (SMEs), as well as professionals, managers and executives (PMEs) who are members of professional bodies.

This latest shift is part of a continuing NTUC effort to embrace more groups of workers into its fold, as it reaches out to the 2.3 million resident workers in Singapore. 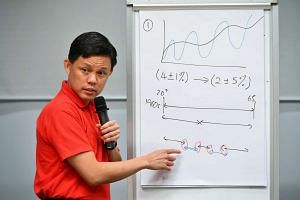 Mr Chan, who is also Minister in the Prime Minister's Office, gave this update of the labour movement's various initiatives at a media briefing yesterday ahead of this year's May Day celebrations.

Initiatives in recent years include measures to help SME workers via their bosses under the labour movement's U SME network, and PMEs though their professional bodies .

Already, 59 professional bodies have tied up with NTUC through its U Associate scheme, nearly on a par with the 58 unions and two associations affiliated to NTUC, he noted.

NTUC has also tied up with bodies representing freelance workers, and offered services to the 1.5 million foreign workers and maids via its Migrant Workers' Centre and Centre for Domestic Employees.

"We are not fixated on one limb (of representing workers through unions)," said Mr Chan. NTUC's various "limbs" allow it to serve more workers, going beyond the traditional model of workers joining unions for protection and collective bargaining. He said: "The only way we can truly live up to being a strong and relevant labour movement is if we can adequately represent the majority of the workforce. This is something we have been (doing) and will continue to do."

NTUC last reported in October 2015 that it had 888,000 union members. It declined to give an update on this number, but said it "serves over 1.25 million Singaporeans" today through its U network.

He added that the expansion of NTUC's scope means it can better cater to all workers in Singapore.

Mr Chan also said NTUC and its social enterprises were expanding their activities to stay relevant to workers, by helping people adapt to change and stretch their dollar.

This includes widening training and career services for workers, placing them in jobs, and having cooperatives explore new services such as healthcare and eldercare.

"What we want is for our working people to develop a relationship with the labour movement, from before they begin work, whilst they're working, when they are transitioning between careers, and all the way until they retire," he wrote in a blog post on NTUC's website.

The annual May Day Dinner, where awards are given to those who have contributed to the labour movement, will not be held this year. Instead, the awards will be presented at an event on May 13.

A version of this article appeared in the print edition of The Straits Times on April 26, 2017, with the headline 'NTUC to bring more workers into its fold'. Subscribe
Topics:
More
Whatsapp Linkedin FB Messenger Telegram Reddit WeChat Pinterest Print Purchase Article Copy permalink