SINGAPORE - Scientists from the Nanyang Technological University (NTU) have come up with a drug that could kill the mosquito-borne Zika virus before severe infection sets in.

The drug, which took six years to develop, was also found to be able to tackle viral infections in the brain - an important feature as Zika typically targets the brain and central nervous system.

Associate Professor Nam-Joon Cho, who is from NTU's school of materials science and engineering, said on Wednesday (Oct 24) that the new drug is unique because it attacks the physical structure of the Zika virus.

Most antiviral drugs work by stopping viruses from replicating, but can become ineffective if a virus mutates.

In contrast, the new peptide drug targets the virus' membrane, which Prof Cho compared to a balloon.

"Like how a pin pricks a balloon, the peptide pricks a hole in the viral membrane," he said. "Prick enough holes, and the virus will be ruptured."

The study was a collaboration between NTU, the Federal University of Minas Gerais in Brazil, and Ghent University in Belgium. Results were published in the international journal, Nature Materials, on Monday. 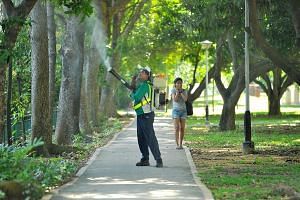 Zika still a mystery after outbreak

Potential treatment for Zika to go on trial in Singapore

Researchers uncover how Zika may be harming foetus' brain

In 2015, the Zika virus made global headlines after thousands of people in Brazil were infected and babies were born with Zika-related birth defects.

The first locally-transmitted case emerged in Singapore a year later, and more than 400 cases were reported by the end of that year. However, there has only been one case in Singapore this year so far.

As part of the study, Prof Cho's team tested the new drug on 12 mice that had been infected with Zika. Ten mice in this group survived. In comparison, all the mice in a separate control group died within a week of being infected.

Scientists added that the new drug has the potential to work against other viruses in the same family, such as dengue, chikungunya, and yellow fever.

They hope to carry out further tests of the drug in larger animals, and eventually in humans once pre-clinical studies have been completed and the proper regulatory approvals obtained.

Antimicrobial peptide expert William Wimley, who was not involved in the study, said that the findings represent a "paradigm-changing breakthrough" in the field of antiviral drug design.

"This may be a game-changing discovery that will be broadly applicable to the design of anti-infective drugs against many classes of pathogens," said Professor Wimley, who is from Tulane University in the United States.