SINGAPORE - Nanyang Technological University (NTU) offers no excuses for the recent food sign language incident that "has resulted in anguish and anxieties among members of the Chinese community".

"We are sorry for the confusion and our lack of clarity on the issue," said NTU president Bertil Andersson, promising that a thorough investigation would be carried out.

He clarified that there is no university policy prohibiting the use of the Chinese language on food stall or retail space signboards.

These remarks come after an outcry from some members of the public, following Lianhe Wanbao's June 21 report that bilingual signs in Chinese and English at an NTU foodcourt needed to be replaced with English-only ones.

A notice received by stall operators at North Spine Food Court - one of 13 at the university - told them to do this before renewing their contracts in August.

In a statement on Wednesday (June 28), Professor Andersson said that Chinese, Malay or Tamil - which, with English, are Singapore's four official languages - can be used on signs so long as the same information is shown in English. 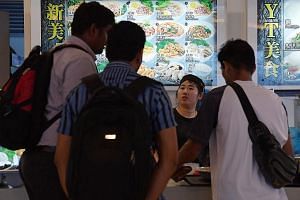 Request to remove Chinese signs at foodcourt 'a misunderstanding'

NTU has told Select Group, which manages North Spine Food Court, as well as all their stallholders, of this policy.

Initial findings by the university show that the instructions given to the foodcourt operators did not follow any NTU official policy, and that the university will conduct a detailed investigation.

Prof Andersson said that should the investigation find that any staff did not act in line with NTU's values and policies, they would "be held accountable".

"We accept responsibility for this incident and for the initial responses to the media which, with the benefit of hindsight, did not address the lapse clearly."