SINGAPORE - The platoon mates of full-time national serviceman Gavin Chan Hiang Cheng, who died in Australia during overseas drill Exercise Wallaby, are back in Singapore.

The Straits Times understands that the annual drill has been completed for their unit, allowing the servicemen to return and pay their respects.

Arrangements are in progress for the others who remain in Australia for the exercise to fly back to Singapore as well.

Third Sergeant Chan, 21, was guiding a Bionix Infantry Fighting Vehicle out of difficult terrain last Friday (Sept 15), when it landed on its side.

The oldest of four siblings was found unconscious next to the vehicle, while the driver and two other passengers travelling in the vehicle were unhurt.

3SG Chan was evacuated via helicopter and transferred to Rockhampton Hospital, where he was pronounced dead at 10.36pm, Singapore time. 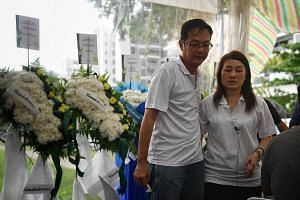 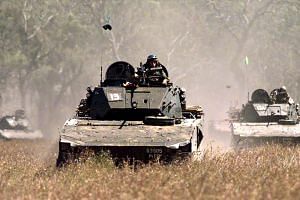 NSF's death in Australia: Vehicle landed on its side

His family arrived in Australia the next day, and returned to Singapore with his body on Tuesday.

Speaking to reporters at his son's wake on Wednesday, Mr Desmond Chan, 49, a cargo sales manager, said he wants to tell the three other servicemen involved in the accident that his family is doing all right.

"I want the three of them to go ahead, think positive, don't feel bad. Life still moves on," he said.

3SG Chan will be accorded the honours of a military funeral, and the cremation ceremony will be held at Mandai Crematorium on Saturday.