While the pioneer leaders were the original architects of Singapore, everyday heroes helped build society here. This is another story about one such person in the series, The Lives They Live.

Mr Robert Chew started donating blood 51 years ago and he has not stopped since.

The last time the 69-year-old stepped up to the plate was on Dec 19 - the 183rd time he has voluntarily made this life-saving contribution.

The semi-retired businessman is among Singapore's oldest and top blood donors, said the Singapore Red Cross which recruits and maintains the register of blood donors.

Mr Chew started donating blood almost by chance. It was back in 1966. Then 18, he had just completed his studies at Victoria School and was mulling over his career move.

"I did not have to do national service, but I was thinking of joining the police force," he recounted. NS was introduced in Singapore only the following year.

One day, he was cycling from his home in Balestier to his father's fruit import and distribution business when he spotted a banner near his father's shop in New Bridge Road.

"The banner said, 'Donate blood, save lives'. It got me thinking about donating blood."

He asked his father for permission. "My father said, 'Very good, but you have to be responsible and committed to it'," he said.

All I remember was that the building was old, I had Milo and the nurses told me not to be scared as I was donating blood for the first time. But I wasn't scared. I saw it as a challenge, an adventure.

"The nurses said I was above 18, so I did not need parental consent to make a donation," he recalled.

The memory of that first experience is now a blur. "All I remember was that the building was old, I had Milo and the nurses told me not to be scared as I was donating blood for the first time. But I wasn't scared. I saw it as a challenge, an adventure."

After that first donation, it became a yearly habit, and he now makes it a point to give blood at least twice a year.

Each donation is said to save three lives, so 180 times three, that is how many (lives)... But I am not counting the number of lives saved, I just do my part and donate.

"I felt it was something I could do to help people, so I kept doing it," he said, noting that his family has been supportive.

Meanwhile, he did not join the police force but found work at a multinational company and eventually started his own business.

He also got married and had two daughters. One is a senior pharmacist and the other, an accountant. His wife is a housewife.

Blood donation rules require that donors wait an interval of at least 12 weeks before they can donate again, and that only if they are physically in good health.

When Mr Chew turned 60, he had to have medical check-ups every year to continue donating blood.

"I visit the doctors at Sata (Singapore Anti-Tuberculosis Association) every year for the check-up," he said, adding that it is free and the doctors check his general health and blood pressure.

Over the course of 50 years, Mr Chew, said blood donation has remained the same in some ways, and changed in others. "They have always given us Milo, that hasn't changed," he said.

But in the 1960s, blood donors were sometimes given stout, a dark beer. "They have stopped giving stout, but I don't drink, so I don't know when that stopped," he said with a laugh.

"Biscuits were given in the 1970s and now they have been upgraded to sandwiches."

The rooms where blood was drawn have become more comfortable too. "There is air-conditioning now," he noted.

But the list of questions that the nurses ask is now longer, Mr Chew said. "The screening has become more stringent."

The size of the needles has not changed, he said, rolling up the sleeves of his shirt to show the needle marks on both his arms. "Sometimes, the nurses miss my veins, so I get poked more than once," he said with a laugh. "It is a little painful, but I have gotten used to it."

The blood bank typically draws between 350ml and 450ml of blood from each donor.

Mr Chew estimated that his 183 donations would have added up to more than 70 litres of blood, or about 210 cans of drinks.

Another way of looking at it - Mr Chew has drained his body of blood 18 times, over his lifetime as a donor. 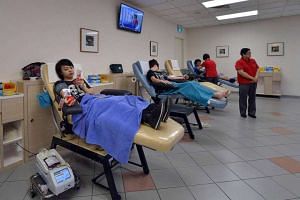 Get the word out - blood donation is good for donors

Asked how many lives he thinks he has saved, he said: "Each donation is said to save three lives, so 180 times three, that is how many (lives)."

Each unit of blood donated is typically divided into three primary components - red blood cells, plasma and platelets - which can save up to three lives.

"But I am not counting the number of lives saved, I just do my part and donate," he said.

Mr Chew's 183 donations put him just 17 donations shy of the highest award - the Medal for Life - that the Singapore Red Cross gives to donors who have made at least 200 donations.

"I am not counting that too," he said, referring to the award. "I donate full blood, which means that I can only donate once every three months or four times a year. If I donate just platelets, I can donate every month and I would have reached 200 donations already."

Mr Chew said he plans to keep donating blood as long as doctors give him the green light. He keeps fit by jogging thrice a week in Punggol, near his home, and avoids oily and unhealthy food.

He said: "By keeping myself healthy, I can keep donating blood and saving lives."

A version of this article appeared in the print edition of The Straits Times on January 10, 2018, with the headline 'Now 69, he's donated blood since he was 18'. Subscribe
Topics:
More
Whatsapp Linkedin FB Messenger Telegram Reddit WeChat Pinterest Print Purchase Article Copy permalink