For months, people have been trying to sneak into the grounds of Novena Church to surreptitiously snap photos of the striking new Gothic-style building that has risen at 300, Thomson Road.

Soon, they will not have to do so.

After being closed for nearly three years for an extensive overhaul, the Church of St Alphonsus, more popularly known as Novena Church, one of Singapore's most iconic and popular Catholic churches, will finally reopen in two weeks. The first mass will be held on Sept 29 at 6.30pm.

This comes after a $54 million revamp that sees the 67-year-old church taking on a gleaming new look. Clad in granite outside and limestone inside, the church's sanctuary now features soaring arches, intricate columns, a dome and 18 large stained-glass windows.

But the key priority for the church, run by the Redemptorist Order, was to maximise seating capacity for worshippers.

Services used to be cramped and humid, with some worshippers straining their necks for a view of the pulpit. The seating capacity has now almost doubled, from 800 to 1,500, said Father Simon Tan, the priest in charge of the project. There is also more standing room after a carpark was converted to a plaza.

Also new is the installation of air-conditioning. A special scent has even been created to be diffused throughout the space. Called Aroma Di Novena, the anti-viral and anti-bacterial scent features the essential oils of frankincense, rosemary, lavender and citrus.

"We made the changes so worshippers would feel comfortable," Father Tan told The Straits Times.

Before the upgrading, the church drew about 15,000 visitors across its 10 Saturday services, with hundreds spilling outside.

Many people go there because they believe in the intercession of Mary, the mother of Jesus. It is the only church in Singapore that offers multiple Novena sessions - held in her honour. A Novena generally refers to nine days of prayers.

So prominent is the church that it lends its name to the MRT station and other roads in the area.

The design team behind the revamp said it produced a design somewhat "reminiscent of European churches" - a design rare for modern Catholic churches here, which tend to opt for more practical styles due to land constraints.

The new Gothic-inspired sanctuary is connected to the original, conserved 1950s building.

Mr Melvin Gamayot of CGN Architects said he felt a lot of pressure while working on the project.

"I usually design condominiums and commercial projects such as hotels, so I had a lot of sleepless nights coming up with a design and communicating this to the contractors."

He said he was inspired by the Bible scripture of King Solomon's temple. The king had a temple he built that was inlaid with carved engravings of palm trees. "Inspired by the palm trees, I clad the columns of the main sanctuary hall in curved segments of limestone to create the appearance of a cluster of thin palm tree trunks with ribs, reaching for heaven," said Mr Gamayot.

A three-storey building housing a 200-seat auditorium and multi-purpose hall has also been constructed to replace a previous building that was termite-infested.

An underground carpark has been added as well. This was where a large portion of the funds went, said Father Tan. The money was raised through activities such as a gala dinner and walkathon.

The church sits on freehold land.

During the closure, the church's services and masses were held at the Church of the Risen Christ in Toa Payoh Central and St Joseph's Institution Junior's school hall.

Father Tan said he hopes the church will become a "shrine and a home where all are welcome to find prayer and peace, healing and hope, life and love". 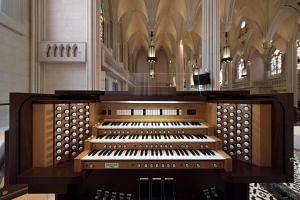 In Pictures: Revamped Novena Church reopens with a new look

Some worshippers described the upcoming reopening as a "homecoming".

The new building will be blessed by Archbishop William Goh on Oct 25.

• Go to http://str.sg/novena for more photos of the new-look Novena Church.

Correction note:  Architect Melvin Gamayot has apologised and clarified that the wrong word was used in the video. He meant devotion, not worship, to Mother Mary.