SINGAPORE - It is "not possible" for the authorities to go through every piece of reading material, so even if the Government imposes guidelines on them, it is "difficult to enforce", said Minister for Communications and Information Yaacob Ibrahim on Friday (June 9).

But he said that the Government and the National Library Board (NLB) will learn from the episode involving a controversial series of Malay language books that was available for loan to young people.

The books have since been removed from shelves by the NLB.

Dr Yaacob was commenting on the sidelines of a reading event on whether NLB would be reviewing its guidelines on children's books.

This follows a Thursday report by The New Paper that flagged concerns over copies of the Malay-language series - Agama, Tamadun Dan Arkeologi (Religion, Civilisation And Archaeology) - which were available in libraries since 2013, and placed in the junior non-fiction section.

Published in Malaysia by Penerbit Sinar Cemerlang, the series presented Jews in a negative light and seemed to legitimise the use of violence in the name of Islam. One book had a picture of a Muslim boy, wearing what seemed to be a suicide vest, surrounded by masked adults. 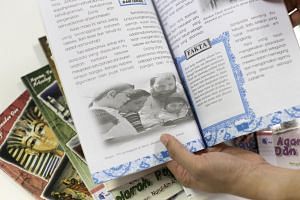 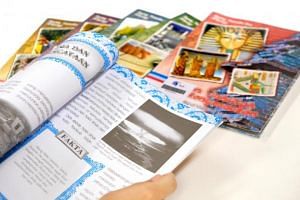 The books came to light after a Twitter user in Singapore shared photos of them over the weekend.

Dr Yaacob said on Friday that NLB "has done its due diligence, it has done its very best".

"We are glad members of the public alerted us. We have done our part, and we will continue to review our process," he said, noting that the books were brought to the Government's attention early and decisive action was taken.

"Like everything else, we can never be 100 per cent foolproof," he said, adding later that the NLB has to rely on members of public for information. "But we learn from each experience, and I think NLB will learn from this experience."

The NLB had told The New Paper earlier this week it would withdraw the books immediately, and "call upon the Library Consultative Panel to review the series". The independent panel is made up of 18 members.

At the same time, the NLB said it could not vet all titles thoroughly given its large collection, and "hence, we take seriously readers' feedback on titles added to our collections".

On Thursday, the Ministry of Communications and Information told The Straits Times that it had asked the NLB "to review its vetting process for potentially divisive and sensitive materials".

Dr Yaacob said on Friday that he would leave NLB to do the work it needed to do with its panel of experts, and that the Government "can tighten in some areas".

Asked if NLB should have been more stringent with filtering what is acceptable for the public and whether all books should be made available to everyone, Dr Yaacob said that "there are some lines we need to draw".

"Some books that undermine national security, undermine racial and religious harmony, we have to take (those) off. Because if you provoke one group to hate another group, then that is not something we would want to promote in Singapore," he said.

"So there should be some lines that we should not cross. Beyond that, I think that the boundaries are very wide for Singaporeans to decide for themselves."