Touched by the deeds of local heroes who appeared in the news this year? Now is your chance to give them the recognition they deserve.

The Straits Times is opening nominations for the third edition of The Straits Times Singaporean of the Year 2017, which seeks to honour an individual or group of people whose extraordinary acts of goodwill have improved their community and the lives of others.

The annual award, supported by bank UBS Singapore, will be given out early next year.

The public can nominate people for the award from now until Dec 31. Nominees must be Singapore citizens who made the news this year.

Joseph Schooling and his parents, May and Colin, won last year's award after he took home Singapore's first Olympic gold medal in the 100m butterfly last year. In 2015, Madam Noriza A. Mansor won hearts when she helped an elderly man who soiled himself in public.

The Straits Times will unveil the 10 shortlisted candidates in batches between October and December. It will be followed by two weeks of public voting, and the outcome will be used as a reference by the 15 judges when making their final decision.

This judging panel consists of editors from the ST newsroom, as well as judges as diverse as chef and restaurateur Willin Low, and social entrepreneur and activist for children and women Saleemah Ismail. 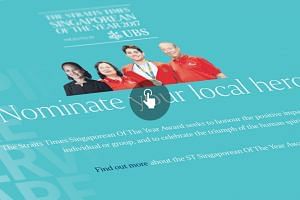 New to the panel this year are singer-songwriter Dick Lee and Ms Yeoh Choo Guan, UBS' head of Asean equities.

The Singaporean of the Year will receive $20,000 and a trophy, while the other nine finalists will each get $5,000. The prize money will be sponsored by UBS.

ST editor Warren Fernandez, who is also editor-in-chief of Singapore Press Holdings' English/Malay/ Tamil Media Group, said: "In the first two years of the award, we uncovered some truly amazing Singaporeans. All the nominees made us proud to be fellow Singaporeans, by their actions and their lives. That is what this award is about, and we want to continue to shine the spotlight on Singaporeans who inspire us all."

Mr Edmund Koh, UBS Singapore's country head, said: "We are excited to continue celebrating role models in our community who inspire us to make a difference in our ordinary lives, through their extraordinary actions.''

•To nominate someone or find out more about The Straits Times Singaporean of The Year award, go to str.sg/soty17nominate

•People can send inquiries about the award to stprojects@ sph.com.sg, with Singaporean of the Year in the subject header.