There has been no evidence to support an allegation that a staff member "looted" tickets to Ed Sheeran's concerts at the Singapore Indoor Stadium, a Singapore Sports Hub spokesman said yesterday.

The statement comes a day after reports of a Carousell user claiming that a Sports Hub staff member had bought 220 tickets to Sheeran's sold-out concerts in November to resell them. The allegation prompted an investigation by the Sports Hub.

"There were no suspicious transactions and tickets were purchased within the respective transaction limits," he added.

The spokesman said that while the Sports Hub treats such allegations "seriously", it has "confidence in the integrity of (its) staff and systems".

He added that "no resellers have been authorised to sell tickets for this show", urging patrons to buy tickets through official and authorised channels. 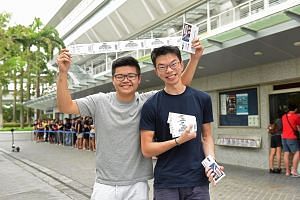 Last Saturday, it was reported that a 24-year-old student going by the name of Aida Aretha on Facebook posted screenshots of a conversation on online marketplace Carousell, where another user was selling Category 1 tickets at $1,100 a pair. The tickets, released by ticketing agency Sports Hub Tix, originally cost $248 each.

In the screenshots, the seller claimed his friend was in the Sports Hub management and had bought 220 tickets - 100 tickets for the Nov 11 concert, and 120 for the Nov 12 concert. The seller said he had 24 tickets and was keeping two for himself.

The Sports Hub said in an earlier report that it does not allow in-house bulk buying by its staff.

While there is no legislation in Singapore to prevent the resale of tickets, this is prohibited under the Sports Hub's terms and conditions of sale.

Resold tickets could be seized or cancelled without refund or other compensation. Concert organisers here have previously voided tickets that were resold online at inflated prices.

The concert promoter for Ed Sheeran's shows, AEG Presents, did not comment by press time yesterday.

A version of this article appeared in the print edition of The Straits Times on May 15, 2017, with the headline 'No sign of bulk buying by staff: Sports Hub'. Subscribe
Topics:
More
Whatsapp Linkedin FB Messenger Telegram Reddit WeChat Pinterest Print Purchase Article Copy permalink