SINGAPORE - During his roughly 30 years spent in and out of prison, one of the biggest regrets former offender Selvarajan Isaac Shadrak had was the effect his imprisonment had on his mother.

Without technology like teleconferencing, it would take her hours to travel from Pasir Panjang to Changi Prison and while waiting for her son, Mr Selvarajan's mother would often get emotional as she listened to the stories of other families with incarcerated relatives and watched them cry in despair.

Such facilities, which allow families of inmates to chat with their loved ones from remote locations through videoconferencing, was only introduced in Singapore in 1999.

The ninth and latest of such services - found in social services and prison link centres - was opened on Friday (Jan 25) at the Industrial & Services Co-Operative Society (ISCOS) in Alexandra Road to cater to families living in the area.

"Tele-visiting rooms are very helpful, because they offer privacy,"said Mr Selvarajan, 67, who works as a programme coordinator and volunteers at ISCOS. He was released from prison in 2001.

"It hurts me that she travelled all the way to Changi and cried. Now with tele-visit, it's more convenient. You have a time slot and you don't need to wait with many other people."

At ISCOS' newly opened iCosy Hub, which features a tele-visiting room, among other features, the goal is to offer stronger support for former offenders and families of inmates. 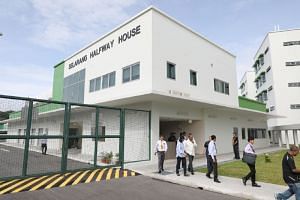 Chance for prison inmates to study for poly diploma

Keeping an eye on things with fewer prison guards

Senior Parliamentary Secretary for Home Affairs Amrin Amin, who was the guest of honour at the launch, said the facility "performs a very useful function where (former offenders) can come together in a cozy place and eat, talk, and get help for various issues - from appointments to speaking to each other to bonding".

The local convicted inmate population as of 2017 is over 10,200, with 8,885 penal inmates and 1,360 Drug Rehabilitation Centre inmates. All are eligible to meet their family members. Visits are capped at twice monthly and family members can choose either one face-to-face visit and one tele-visit, or two tele-visits.

For former offender Subin, 35, who declined to give his full name, the chance to see his parents and loved ones while he was serving his sentence at Changi Prison from 2009 to 2010 was critical to his well-being in prison.

His then girlfriend (now wife) would travel from her workplace in Toa Payoh to Changi to visit him every month. She would skip her lunch and work till late to make up for the time she was away. She also used the tele-visit service at the former Toa Payoh Prison Link Centre.

To pass his time, Subin, who now works as a freelance commercial diver and logistics driver, would read books in prison and share new information with his parents and girlfriend, to their delight.

"They will ask me, 'How did you know this? When did you find out?' They would be surprised. It gave them the confidence that I was not behaving badly anymore, but I was reforming inside, and it gave them hope."