In a move to replace its older submarines and match the expansion of navies in Asia, Singapore will be acquiring two new subs that will be delivered from 2024, Defence Minister Ng Eng Hen said yesterday.

With 800 more warships and submarines expected to operate in the Asia-Pacific by 2030, the United States Navy will also bolster its capability to keep up with - or even exceed - the pace of development of maritime forces by other regional countries, said its chief of naval operations John Richardson.

Dr Ng, who was speaking at the opening of the 11th International Maritime Defence Exhibition and Conference (Imdex) Asia, said: "To be effective, the Singapore navy needs to keep pace with this growth of navies in Asia."

This bolstering of maritime forces comes as commercial shipping has burgeoned, with Asia-Pacific naval budgets set to increase by 60 per cent through 2020.

But senior government and naval officials, including Dr Ng, also highlighted the need for countries to work together in tackling threats even as they strengthen their navies and security agencies.

Senior Minister of State for Defence and Foreign Affairs Maliki Osman said countries should cooperate and abide by international agreements and codes of conduct to avoid unintended sea conflicts. 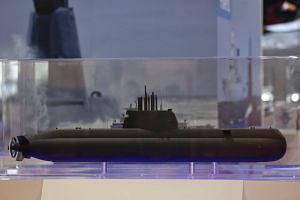 Why US Navy needs to expand capability

But trust must be built through regular communication for multilateral networks to be effective, he added. "Without trust, promises of cooperation would merely be superficial lip service," he said.

Admiral Richardson also told reporters before the start of Imdex Asia that in "an era of maritime competition", countries should identify areas of common interests and talk openly about differences to reduce the risk of miscalculations.

He also reaffirmed the close partnership with the Singapore navy, adding that he has spoken to navy chief Lai Chung Han about improving the relationship further.

He later joined seven other navy chiefs, including Rear-Admiral Lai, at the International Maritime Security Conference, held as part of Imdex Asia.

Discussing the changing security and strategic landscape, RADM Lai reiterated the need to reinforce a rules-based maritime system that will help prevent misunderstandings at sea.

A record number of maritime defence and naval forces are attending the biennial three-day Imdex Asia, which began yesterday.

On top of navy chiefs, coast guard directors-general and representatives of navies and coast guards from more than 40 countries, 28 foreign warships from 20 navies will be at the maritime defence show at the Changi Exhibition Centre.

Maritime expert Collin Koh from the S. Rajaratnam School of International Studies said that one factor fuelling the growth of navies in the region is the ongoing territorial disputes in the South China Sea.

"For claimant states, naval power puts some muscle to their claims. For non-claimant states like Singapore, geopolitical uncertainty means a need to invest in insurance," he said.