Drivers will have to access different parts of the Singapore General Hospital (SGH) campus through a new network of roads, with three separate routes to specific areas.

There is currently one interconnected network that loops through the hospital's campus.

From Dec 29, drivers who want to access the current National Cancer Centre Singapore (NCCS) building or SGH Blocks 2, 3 or 4 are advised to use either Kampong Bahru Road or Jalan Bukit Merah to enter the hospital campus via the southern end of College Road.

To get to Academia, the Singapore National Eye Centre, the Diabetes and Metabolism Centre, and Blocks 5, 6 or 7, drivers should use Outram Road and enter the hospital campus via the northern end of College Road.

The new road network is to facilitate smoother traffic flow, with the opening of Outram Community Hospital last Saturday and the construction of buildings such as the new NCCS, Emergency Medicine Building, as well as the Elective Care Centre and National Dental Centre Singapore.

"While the current network is integrated, it is not sized adequately to cope with the traffic flow," said Mr Kevin Low, chief operating officer of facilities and infrastructure development at SingHealth, at a media briefing yesterday. "The new road network has straight thoroughfares that will serve the campus with the three routes."

Since Dec 2, commuters have been served by shuttle buses plying two routes to different parts of the campus.

Previously, the buses plied only one route, which looped around SGH, and they took about 40 minutes to complete their journey.

The two new routes now take about 35 minutes and 20 minutes to complete.

There will be no change to the routes for ambulances and vehicles ferrying patients in need of urgent medical attention, which should use Jalan Bukit Merah for the accident and emergency department.

A link bridge on the second level connects the community hospital and the tower with SGH Block 3. 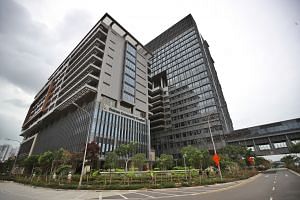 Community hospital opens next to SGH in Outram, with facilities that resemble public estates

Separately, the current Hospital Drive, which curves around the accident and emergency department and the main SGH building - which consists of Blocks 1 to 7 - will be renamed Hospital Crescent.

A new road between the National Heart Centre Singapore and the Outram Community Hospital and SingHealth Tower will be named Hospital Drive.

Two slip roads will also be closed permanently, while a junction will be opened between Eu Tong Sen Street and the new Hospital Drive. It will be connected to Hospital Boulevard, as part of one of the new routes.

Staff and patients welcomed the changes to the new road network.

Civil servant Grace Wong, 27, who works at the campus, said the roads there are usually congested due to a large flow of patients, even during non-peak periods.

"(The new network) will be useful when I take private-hire cars to external meetings, as they sometimes take a long time to arrive due to the congested road situation," she said.

In 2016, Prime Minister Lee Hsien Loong unveiled a masterplan for SGH that showed the amount of space devoted to patient care at the Outram campus would treble over the next 20 years.

The plan also showed that the entire SGH will be relocated to be nearer to the two MRT stations in Outram Road and Eu Tong Sen Street to make it more convenient for patients and their visitors.