If you are reading this on the MRT, look around. The train you are in may have tip-up seats.

These are among the features of 12 new C151C trains, the first of which went into service yesterday morning from Ang Mo Kio station.

The other trains will progressively commence passenger service, and all 12 are expected to be in service by early next year.

These new trains are the first in Singapore to feature tip-up seats. Each car has 12 such seats, which can be folded up to provide more standing space for commuters during peak periods.

The Straits Times understands that two new C151C trains were put into service yesterday. One of the new trains experienced intermittent signalling faults, however.

Ms Margaret Teo, SMRT's vice-president for corporate communications, said: "While the train was able to continue in service, as a precautionary measure, we made arrangements for the train to end its service at Ang Mo Kio MRT station so that it can return to the depot for checks."

Commuters were advised to board the next train at Ang Mo Kio to continue their journeys.

"Even as rigorous testing is conducted before trains commence passenger service, we seek commuters' understanding that new trains may encounter occasional faults as they are run in for passenger service," Ms Teo said. 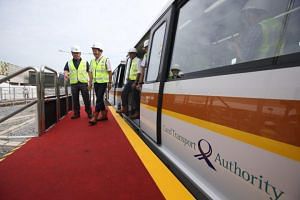 The new seats - when folded - allow each train to pack in 100 more commuters, increasing its capacity by about 6 per cent to 1,700 passengers. The new trains also come with an improved current collector device (CCD), whose shoes are in contact with a third rail that supplies electrical power to the train. This CCD has been improved to provide timely information to the train integrated management system in case any shoes unexpectedly shear off, allowing train captains to take prompt remedial action.

The new train's livery incorporates red and green stripes against a white background, with red symbolising the North-South Line, and green the East-West Line. The new trains will operate on both lines.

The Land Transport Authority's logo can also be seen on the new trains. It is the first time this logo is featured on the body of a North-South and East-West lines train.

Student Owen Nicholas Loh, 19, said: "I like the tip-up seats because they will help to ease the congestion during busy periods."

Full-time national serviceman Muhd Naz Farihin, 21, who takes the MRT from his Woodlands home to his camp in Choa Chu Kang, said: "During peak periods, I can usually only get on the second train. Now that these trains can carry more people, hopefully, I will be able to get on the first train from now on."

This MRT train comes with tip-up seats which can be folded up to provide more standing space for commuters during peak periods. When folded, the seats allow the train to pack in 100 more commuters, increasing the capacity by about 6 per cent to 1,700 passengers. The train, which went into service yesterday morning from Ang Mo Kio station, is one of 12 new C151C trains. The 11 others will progressively be put into service and all 12 are expected to be running by early next year.