SINGAPORE - An exhibition on Hokkien architecture that opened on Saturday (Oct 26) shows the two-way influence between Singapore and China, after immigrants from southern Fujian province started pouring into Singapore in the 19th century.

One of these Hokkien immigrants was Lim Loh, whose 11th son was war hero Lim Bo Seng.

Photographs of Lim Loh's 99-room house in Nan'an in Fujian province, where Lim Bo Seng was born, are part of the exhibition titled Hokkien Architecture: From Thian Hock Keng to Lim Loh House.

While Thian Hock Keng temple in Telok Ayer Street, which was completed in 1842, clearly shows Fujian influence, the exhibition also shows "how our culture influenced southern Fujian province, through the immigrants and Hokkien pioneers", said Dr Chen Yu, the curator of the exhibition and an adjunct assistant professor at National University of Singapore (NUS) architecture department.

The exhibition is organised by the NUS' department of architecture, which has been sending its students on field trips to southern Fujian in recent years.

Dr Chen said the exhibition also aimed to encourage "a confidence in Singapore Chinese culture for the younger generation, which clan associations worry about". 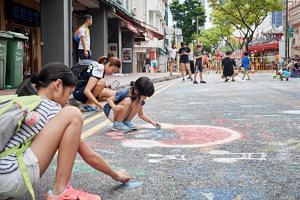 She pointed out typical Fujian architectural features at Thian Hock Keng temple, such as the upward-tilting "swallow-tailed ridges" on its roof and timber support structures flanked by representations of Chinese women.

Architectural influence from Singapore is visible in Lim Loh's house in China, she said.

The same pattern of British-made tiles in Thian Hock Keng temple can be found in Lim's house in his hometown of Houpu in Nan'an. The mansion was built around the same time as a massive renovation at the temple in 1906, when these decorative tiles were installed.

Curved doorway arches, similar to those in some colonial buildings here, can also be seen in Lim Loh's home. A Sikh figure with a turban adorns an ornamental timber structure there.

The exhibition, which runs till Nov 30, can be viewed at 137 Telok Ayer Street, opposite iconic Thian Hock Keng temple, Singapore's oldest Hokkien temple. Other Hokkien pioneers like calligrapher and poet Pan Shou and renowned philanthropist Tan Kah Kee also feature in the exhibition.

The display is supported by partners such as Singapore Hokkien Huay Kuan and Urban Redevelopment Authority (URA). The exhibition also commemorates this year's 75th death anniversary of Lim Bo Seng, whose anti-Japanese activities during World War II led to his capture and death in Japanese custody in 1944.

Businessman Lim Cheng Eng, 78, who viewed the exhibition on Saturday, said: "This history should be made widely known. The cultural and national contributions of Lim Loh and Lim Bo Seng should be passed on to future generations."