A hawker centre that blends the old and the new will open in November in Pasir Ris Central - the latest in a recent wave of establishments trying to find ways to keep the hawker culture alive among young Singaporeans.

Besides food for traditional tastebuds, it will have one floor of "creative cuisine" for the adventurous palate, served in a space designed to look like a hipster cafe.

To add to the "hipster food market vibe", NTUC Foodfare, which will run the centre, said events, such as art markets, craft fairs and music gigs, may be held in the space to enhance the dining experience.

The new Pasir Ris Central Hawker Centre will occupy a two- storey building. The first floor will have 20 cooked food stalls offering traditional hawker fare like chicken rice, while a "hipster" food hub called Fareground will be on the second floor, with 22 stalls.

The hipster menu, which typically tends to refer to cafe food, fusion fare or local food with a twist, could include offerings such as beef stroganoff and stew, or Japanese donburi in which diners can mix and match the ingredients.

It will attract customers because there isn't the added service charge and, whether young or old, they want to try something new. People also feel more comfortable and relaxed in a casual setting than in a restaurant or an actual cafe. 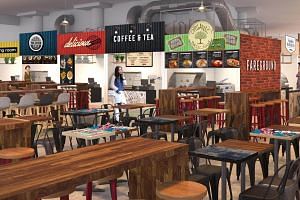 The final list of food offerings, however, will be unveiled after Sept 22, the closing date for Singaporeans and permanent residents to apply for the stalls. They can start applying from next Monday.

The hawker centre is the third newly built one to be managed by NTUC Foodfare, after Bukit Panjang Hawker Centre and Market and Kampung Admiralty Hawker Centre.

Its spokesman said with Fareground, it hopes to draw new-generation hawkers to ply their trade under one roof and in an environment that appeals to them. "This is also a way of keeping the hawker centre culture alive among the younger generation." She envisioned Fareground as not just a place where people eat and leave, like at a typical hawker centre, but also a space for people to gather and socialise.

It follows in the wake of hawker centres such as Timbre+ in one- north, which boasts a live band, and Salut Coffeeshop in Bukit Merah which sells European cuisine.

Mr Joey Lim, owner of the Builders at Sims cafe near Aljunied MRT station, said the hawker centre will offer the best of both worlds. "For start-up businesses, it is a safer venture than opening a cafe," said the 30-year-old, who is confident that the unusual mix of old and new will draw people.

Chef Tan Jun Ann, 34, who co-owns The Skewer Bar in a Geylang coffee shop, agreed. He foresees that the many young people in Pasir Ris will be drawn to the hawker centre.

"It will attract customers because there isn't the added service charge and, whether young or old, they want to try something new.

"People also feel more comfortable and relaxed in a casual setting than in a restaurant or an actual cafe," he said.

NTUC Foodfare said every stall on both levels will offer at least two budget meals, in line with its aim to offer residents affordable and quality cooked food. The hipster cuisine will also be comparatively cheaper than similar dishes at cafes.