The new Coastal PlayGrove, which spans 4.5ha, was built as part of efforts to rejuvenate East Coast Park and help spread out human traffic to the other parts of the park.

Singaporeans with fond memories of Big Splash can now revisit them at the family-friendly destination, which retains some designs from the iconic water park originally built in 1977. For instance, a 16m play structure that is a reconstruction of the Big Splash tower houses a vertical net play area, suitable for youngsters.

Visitors can also access two enclosed tube slides from the third and fourth floor of the tower, which are 7.3m and 11.9m high respectively.

There is also a water play area with wading pools, a nature play garden designed for children aged three to 12, and an outdoor classroom by the sea designed for pre-schoolers.

Big Splash closed in 2006 and was later redeveloped as a dining and lifestyle destination that shuttered in 2016. Redevelopment works for Coastal PlayGrove started in 2017.

Mr Lee said the opening of Coastal PlayGrove marks the completion of redevelopment works for East Coast Park, which were announced in 2017.

"We embarked on our efforts to redevelop our largest and most popular park, to provide Singaporeans with a diverse range of recreational opportunities," said Mr Lee.

The other redeveloped sites in the park are Raintree Cove as well as the 5.4ha Cyclist Park, which opened in 2019 on the site of the former Goldkist Chalets. 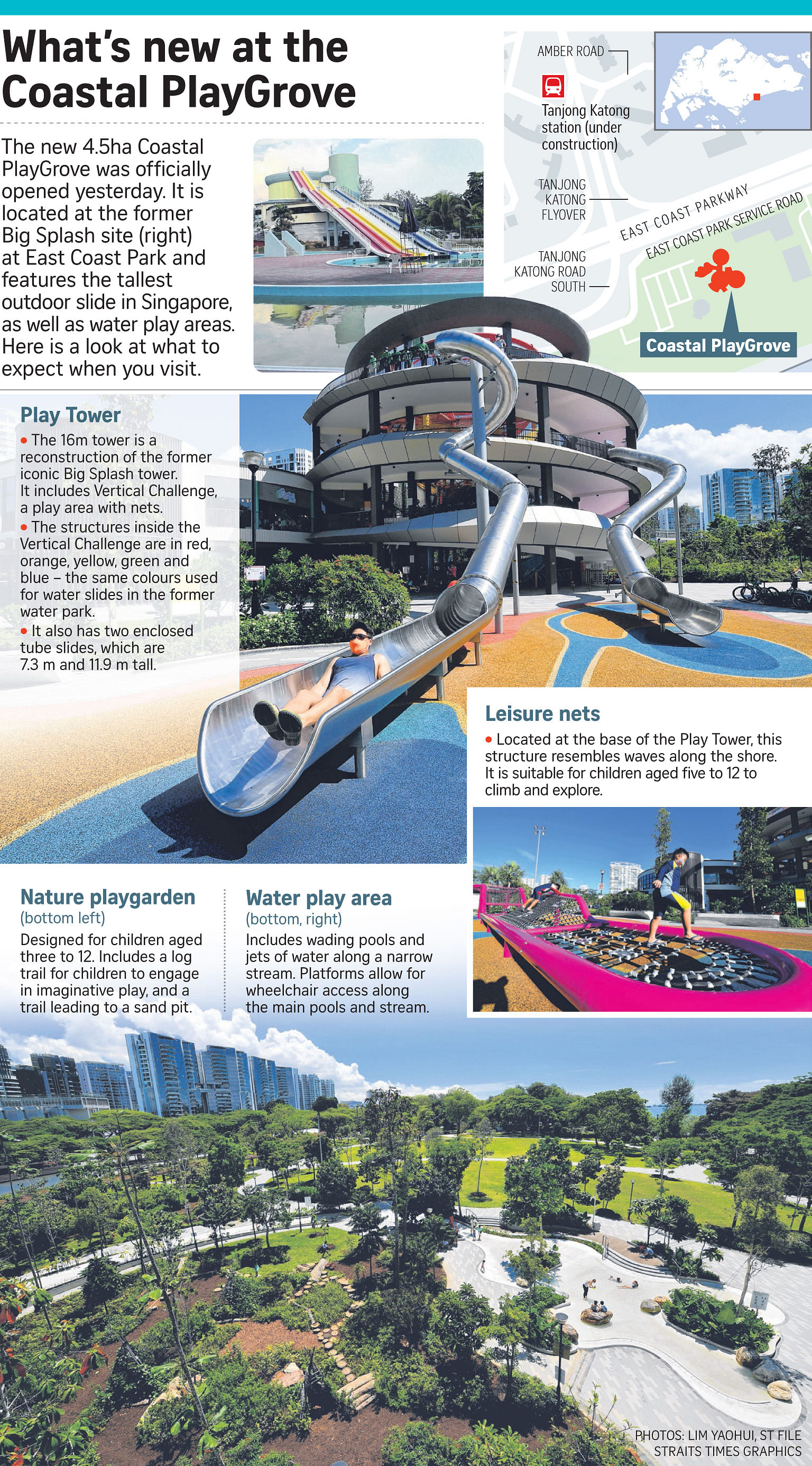 Raintree Cove, which formerly contained futsal courts and food and beverage outlets, was converted into a tranquil area with swings.

The total cost of the three developments - Coastal PlayGrove, Raintree Cove and the Cyclist Park - was $24.5 million.

Coastal PlayGrove was originally slated to open by end-2019.

Completion of the development was delayed as a considerable amount of time was spent designing the area, and researching the historical context of the former Big Splash site, said Mr Tan Jun Chao, director of parks for the National Parks Board. This is because it holds a lot of memories for Singaporeans.

The water play area and the vertical net play area - called the Vertical Challenge - are open from Tuesdays to Sundays, 8am to 8pm.

Due to current Covid-19 restrictions, just 20 people are allowed at a time on each level of the vertical net play area, and additional manpower will be deployed to monitor the situation during peak hours.

"We seek the public's understanding and encourage them to visit Coastal PlayGrove on weekdays or during off-peak hours to avoid disappointment," said NParks, adding that visitors should observe safe distancing, and keep to group sizes of eight people and below when visiting the park.

What's new at the Coastal PlayGrove