Residents of Sembawang GRC received the first 50 of 336 lifts in a $41 million programme that will see the units replaced early by those that are faster, safer and capable of carrying more people.

MP for Sembawang GRC Vikram Nair said at a ceremony yesterday that it is the first time a town council is replacing lifts ahead of schedule on such a large scale, with more than 100 lifts replaced under one programme.

Most lifts have a lifespan of between 25 and 27 years, but the lifts in Sembawang GRC are "being replaced at around the 20-year mark", he said. "We did an analysis of what it would cost to maintain these lifts for the remainder of their lifespan... It was actually going to cost significantly more than if we replaced them early," he added.

The programme, which will be rolled out in phases, will replace lifts that serve 15,260 households in Woodlands, Sembawang and Admiralty by February 2021, said the Sembawang Town Council.

A Sembawang Town Council spokesman said lifts were previously replaced based on their age. She added that other town councils have also called for tenders or started works to replace lifts ahead of schedule, if doing so is more cost-effective than maintaining them.

Sometimes, we had to close the doors manually (to get the lift moving).

MR LEE WENG KHOR, who has lived at Block 769 Woodlands Drive 60 for 12 years, on the old lifts at the block.

Mr Lee Weng Khor, 45, waited three months to have a new lift at Block 769 Woodlands Drive 60. The engineer lives on the top floor of the 14-storey Housing Board block with his wife and daughter. He said the three lifts at the block "sank a bit" when residents stepped into them, and their doors did not always close fully.

"Sometimes, we had to close the doors manually (to get the lift moving)," added Mr Lee, who has lived there for 12 years.

Mr Nair, who is also town council chairman, said the town council had "very healthy lift replacement funds which it could tap" to replace the lifts. Residents will not have to pay for them. 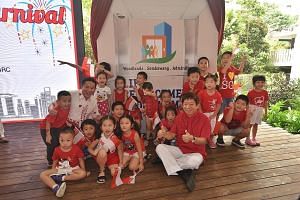 Sembawang GRC to get 280 new lifts

It's a squeeze for lift repair with tech advances

Mr Nair added that the new lifts can also carry up to 10 people, up from eight, and come with energy-efficient and safety features.

EM Services, the company that is taking on the works for the first 280 new lifts, had to consider the maintenance needed for the first 10 years of the lifts' working lives as part of the conditions of the tender.

Mr Nair said this means that the company with the winning bid has to take "long-term responsibility" for the new lifts.

It will have to be "more careful with the installation" because it is responsible for all replacements, he added.

The remaining 56 new lifts have not been tendered yet.

"The new lift is brighter, and the buttons are more robust. The lift feels more reliable," he said.