SINGAPORE - When his electric scooter exploded in his Woodlands flat on Friday (Sept 22), sparking a fire that engulfed the four-room home he shared with his wife and four cats, Mr Shah Rizal Abdul Razak was devastated.

The fire broke out around 4.10pm at Block 886B, Woodlands Drive 50, and Mr Rizal managed to escape what he thinks was a fire sparked by an exploding e-scooter battery.

Photos of the aftermath show the interior of the flat charred and blackened, and furniture destroyed.

However, neighbours banded together and donated cash and furniture to Mr Rizal and his wife, Ms Haryati Ali, giving them some comfort after the fire ravaged the flat that was their home for three years.

Mr Rizal, a 34-year-old civil servant, told The Straits Times on Tuesday that the flat has been handed over to Housing Board contractors, who will restore the flat to how it was when they first bought it as a Build-To-Order flat.

His neighbour, Ms Maslindah Sain, posted photos and a video on Facebook on Saturday, asking for help to assist Mr Rizal "in whatever way you can".

Among the items people have pledged to the couple are: A kitchen cabinet, a wardrobe, cleaning and painting, a brand new television set and electrical appliances.

Mr Rizal said most of those who came forward to help live in the same estate, and they share a Facebook group. Several also donated cash of about $50 to $100 each, with more than $1,000 donated to the couple so far.

"It's quite overwhelming and unexpected," he said. "It's mostly cash and appliances from strangers we have totally never met before."

The items of furniture have not been handed over to them yet, he added, as the couple do not currently have space to store them.

The pair are living at a friend's home in the same block for the time being. 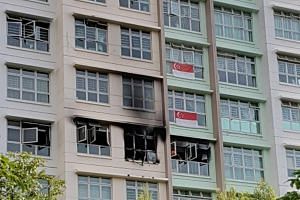 Fire breaks out in Woodlands flat, no injuries reported

Mr Rizal was in the same room when the e-scooter exploded, and said he is still quite shaken by the incident.

"I'm still traumatised, but everyone stepping forward to help - especially my neighbours - has definitely helped to ease the trauma. That makes me happier and not think about it so much," he said.

Mr Rizal said Marsiling-Yew Tee GRC MP Ong Teng Koon met him and his wife at their home on Monday, and said he would try to push HDB contractors to complete repairs quickly.

The flat is expected to be restored to a brand new condition in about one to two months, Mr Rizal said.

Those who would like to help can reach the couple at kenshiriz@gmail.com.