A fire, sparked by an electric scooter battery, destroyed his Woodlands flat two months ago but Mr Shah Rizal Abdul Razak reckons he is somewhat lucky. He escaped unscathed on Sept 22, although tragically, he lost two of his four cats.

The 34-year-old and his wife Haryati Ali, 31, are also thankful for neighbours who pitched in to help.

Mr Rizal, a civil servant, said: "He works as a nurse in Australia. When he heard about the fire, he reached out to us on Facebook and told us that we could stay at his flat for as long as we wanted."

The publicity-shy neighbour, who will be abroad for another year, said: "I did it out of goodwill."

And he has not been the only neighbour to lend a helping hand.

For two weeks after the fire, Ms Khadijah Ali, 33, who lives next door to Mr Rizal, left a donation box outside his unit. It was for people who might turn up out of curiosity after hearing about the fire.

He works as a nurse in Australia. When he heard about the fire, he reached out to us on Facebook and told us that we could stay at his flat for as long as we wanted.

MR SHAH RIZAL ABDUL RAZAK, whose Woodlands flat was destroyed in a fire on Sept 22, talking about a helpful neighbour.

Ms Haryati, a receptionist, said their neighbours, and even strangers, raised $3,000 for them.

Then on Oct 26, home appliance company Midea Singapore donated over $5,000 worth of home appliances including a refrigerator, washing machine, rice cooker, vacuum cleaner, kettle, and even an air-conditioning unit.

"We were quite shocked. These things are essentials we need in our home," Ms Haryati said. 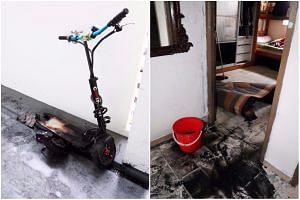 E-scooters go up in flames in Pasir Ris and Yishun

The couple's friends and family organised bake sales which raised $500. Another $2,500 was raised on a crowdfunding page on Give.asia that was set up by the couple's neighbour, Ms Maslindah Sain.

The 44-year-old instructional assistant at the Singapore American School calls herself their "personal assistant". "I helped them liaise with companies, like Midea, who wanted to donate. For now, we can't accept any more donations because there's no more storage space."

The Singapore Civil Defence Force has classified the fire as an electrical accident sparked by Mr Rizal's e-scooter battery. The incident was followed by a spate of fires in Singapore involving electric personal mobility devices, with the latest incident on Nov 8 in Pasir Ris.

Mr Rizal and his wife expect to spend around $20,000 to refurbish their home - the same amount they spent three years ago when they renovated the unit. Renovation works have started and they expect to move back by next year.

It has been a struggle but they have been overwhelmed by the acts of kindness, the couple said.

Mr Rizal said: "My wife and I are coping... slowly but surely. Life still goes on, so we choose not to think so much about what has happened."