Bike-sharing companies will have to moderate the growth of their rental two-wheelers, which have soared to a total population of between 29,000 and 30,000.

They will be fined if they get a notice from the Land Transport Authority (LTA) to remove an indiscriminately parked bicycle and fail to do so within half a day.

Senior Minister of State for Transport Lam Pin Min revealed these measures in Parliament yesterday, in response to MPs who raised concerns about the growing problem of illegally parked shared bicycles.

Dr Lam said the Government will work with the bike-sharing firms to ensure the bicycle population is "commensurate with the availability of public parking places".

"This is to prevent excessive indiscriminate parking, as well as disamenities to the public," he said.

Since the start of the year, three companies - ofo, oBike and MoBike - have flooded the market with their bicycles. As the bicycles do not have to be returned to fixed docking stations, they can be parked anywhere. 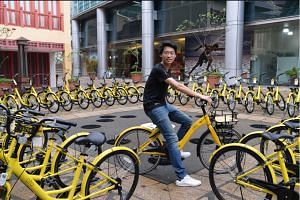 Dr Lam said the LTA has been coordinating with other government agencies and the town councils to "align the approach against indiscriminate parking of shared bicycles".

The LTA said previously that this includes the town councils aligning their by-laws with the authority's regulatory framework for dealing with errant users.

Replying to MPs Zaqy Mohamad (Chua Chu Kang GRC) and Ang Wei Neng (Jurong GRC), Dr Lam said the LTA is working with the National Parks Board, the Housing Board and town councils to increase the bicycle-parking capacity.

The LTA has designated 34 rackless bicycle-parking zones at MRT stations, which can accommodate 1,400 bicycles. There are plans to add 6,000 more bicycle racks at MRT stations and another 500 spots in the city by 2019.

The LTA requires bike-sharing operators to promptly remove bicycles which are indiscriminately parked, Dr Lam said. "It is in their interest to cooperate with the authorities. Any public backlash may make the business model unsustainable."

He said the LTA has served around 1,000 notices for illegally parked bicycles. The operators are given half a day to remove them, after which the bicycles are impounded.

On top of an impound fee of $140 per bicycle, the LTA also recently introduced a $300 fine for the first offence and $500 for subsequent offences.

Of the 1,000 bicycles which were found illegally parked since May, 200 of them have been impounded. About half of the impounded bicycles have been collected by the operators, said Dr Lam.