NEA is satisfied the hotel has implemented the measures required to rectify lapses detected in joint investigations by the authorities, an NEA statement said yesterday.

A total of 333 people reported suffering gastroenteritis symptoms after attending five separate events at the grand ballroom between Dec 1 and 3 last year. Fourteen were hospitalised and later discharged.

NEA said the banquet kitchen serving the grand ballroom was suspended for 55 days from Dec 5 to Jan 28 to protect consumers from public health risks. During this period, the hotel was instructed to do thorough cleaning and disinfection of the ballroom.

In their joint investigations, the Ministry of Health, NEA and the Agri-Food and Veterinary Authority found strong evidence that the gastroenteritis outbreak was due to severe contamination of the ballroom with the highly contagious norovirus. This resulted from poor environmental and hygiene practices, such as improper cleaning of vomit from an incident in the grand ballroom before Dec 1.

Norovirus was detected in the stool samples of 26 affected consumers, three food handlers and 51 service staff, including banquet servers who reportedly continued working while they were ill, the statement said. 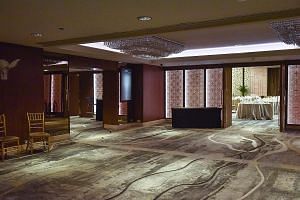 NEA said the hotel has since complied with the stipulated measures, such as disposing of all ready-to-eat, thawed and perishable food items. The hotel has also cleaned and sanitised the premises.

NEA added that all food handlers have since attended and passed the basic food hygiene course again.

Under the enhanced Food Hygiene Officer scheme announced last month, these officers are required to re-attend the WSQ Conduct Food and Beverage Hygiene Audit course if their food establishment has had its licence suspended.

The establishment must also have a trained food hygiene officer before it can resume operations.

Hotel manager Danny Wong said in response to The Straits Times' queries that Mandarin Orchard is committed to investing resources into an enhanced food safety and sanitation programme across its operations.

"We recognise there is much to be done and we are a long way from winning back the trust and confidence of our customers," he said.

NEA said it is currently reviewing the investigation findings and will take appropriate action against the hotel for the lapses. It will continue to place the hotel under close surveillance to ensure that it adheres to its food hygiene plans.