National Day is set to go off with a bigger bang than usual with five fireworks displays planned for heartland sites, in addition to the main event at the Padang.

The four-minute extravaganzas will be staged in Bishan, Wisma Geylang Serai, Jurong East, Punggol and Woodlands on Saturday, a day after the parade.

But it is no easy task and there are no rehearsals prior to the big day.

Military Expert 5 (ME5) Tommy Chaw, 42, who is in charge of the Bishan display, said: "We cannot move the fireworks earlier because most of the team will be busy before Saturday with parade preparations."

The fireworks will be mounted at the heartland sites on Saturday morning, giving teams just five hours to set them up, lay wires and run tests. Despite the tight schedule, ME5 Chaw said all safety measures will have been taken. 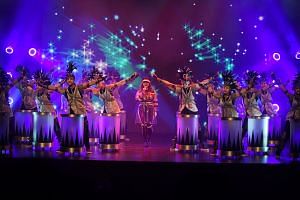 Highlights to look out for at NDP 2019

ME5 Chaw noted that one of the challenges in the heartland is that the public will be a lot closer to the action than at the Padang. He said: "That means we have more restrictive safety regulations and cannot fire as many different types of fireworks as we can at the parade."

Fireworks in the heartland can go only as high as 120m, well under the 180m for the parade.

Around 60 people, including Singapore Armed Forces (SAF) personnel and contractors, will be working on the heartland displays.

ME5 Chaw said the sites and the parade will use similar fireworks and the same team of external contractors, so conditions will be similar.

"The SAF personnel at the heartland are not those working at the parade, but they all have three to six years of experience working with fireworks displays, so they are familiar with the process," he added.

More than 10,000 spectators are expected at each site, which will also host carnivals and visits by the mobile column.

ME5 Chaw said: "This is Singapore's bicentennial year, so we wanted to make it special and bring the display to Singaporeans."