Instead of using English to communicate, the crew of navies participating in an Asean-China maritime exercise used a naval code instead.

Using the Code for Unplanned Encounters at Sea (Cues) to communicate reduces the risk of misunderstanding, and allows messages to be passed on swiftly.

For instance, "Tango-Alpha-Eight-Seven" is a clearer way of saying "leave formation".

It was practised during the two-day sea phase of the Asean-China Maritime Field Training Exercise. The sea phase ended yesterday.

The six-day Asean-China Maritime Field Training Exercise, which ends today, is the first between Asean and one other country. The use of the code was made possible by Asean and its eight partner countries, including the United States, China, Russia and Japan, having adopted it since last year.

RSS Stalwart represents Singapore in the exercise, which involved more than 1,000 personnel from the 11 nations.

Being able to see the kind of roles the navy plays in both military and diplomatic affairs, it also helps me appreciate how NS contributes to our defence.

Though it was the first time that Military Expert 1 Joel Johnson, 29, a communications systems operator on RSS Stalwart, used Cues in a multilateral exercise, he found it quite "simple and straightforward".

"Some common challenges when exercising with foreign navies include strong accents from the other operators or improper voice procedures. As Singaporeans, we also tend to speak fast, and it might be a challenge for others to grasp," he told reporters on board RSS Stalwart on Thursday.

"The last time when we did not have Cues, every other country would take some time to answer the question. But just now, it even became quite competitive as everyone tried to respond quickly," he added.

The successful and safe execution of these serials - or components - of the sea operations were a result of the detailed planning and a good working relationship between the naval officers of different countries, said Captain Derick Ng, 28, the lead planner for the sea phase from RSS Stalwart.

While there were disagreements between the navies during the planning stage, the operations officer said everyone was aligned on safety being a key priority, which became a guideline. 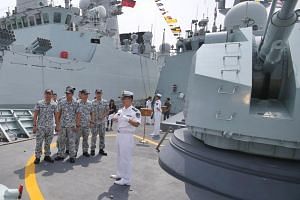 There was no actual contact between ships during the replenishment drill, but it was an important manoeuvre for confidence-building, said Capt Ng.

"You need to be very clear about each other's intentions when you manoeuvre in very close quarters."

Captain Angela Toh, 24, an assistant navigations officer, said she felt proud when she saw the confidence other navies had in Singapore during the manoeuvring segment, where the eight ships sailed together in formation, such as in a single file.

In one manoeuvre, RSS Stalwart took charge of three ships behind it, giving them instructions on how to steer and at what speed to go.

"It takes a lot of trust for them to follow our commands and execute them accordingly, knowing they are in safe hands," she added.

Third Sergeant Yang Wu, a weapon systems operator, is the RSS Stalwart's youngest crew member at 18. On the key learning points, he said: "Being able to see the kind of roles the navy plays in both military and diplomatic affairs, it also helps me appreciate how NS contributes to our defence."