Measures such as increased prescription of atropine eye drops and prevention programme have helped: Experts

Although Singapore has one of the highest rates of myopia in the world, the level here has remained stable over the past decade.

According to the Health Promotion Board (HPB), it has remained constant over the past 10 years - at 65 per cent among Primary 6 pupils and 28 per cent among those in Primary 1, reported Chinese-language paper Lianhe Zaobao.

This comes at a time when myopia rates are rising across the world. In the United States and Europe, where myopia rates are traditionally lower, around half of young adults now suffer from myopia compared with 25 per cent half a century ago. These higher rates have been traced to increased exposure to electronic devices.

But Singapore has bucked the trend owing to various measures taken in recent years, say experts.

He said that over a two-year period, the progression of myopia in children who used these eye drops daily was reduced by 80 per cent, compared with children who were using eye drops without atropine. 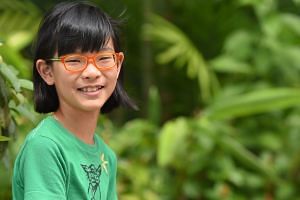 Study to see if atropine drops can prevent myopia in children

Second, in 2001, the HPB introduced a number of initiatives under the National Myopia Prevention Programme, which aims to prevent the onset and rapid progression of myopia among children under 12.

Such initiatives include a Spectacle Voucher Fund, where HPB gives financial aid to underprivileged students who need glasses, and public education efforts where HPB distributes booklets on eye care to students and parents.

But despite the stable rates, 83 per cent of young Singaporean adults are myopic, showing that myopia is still a problem here.

Myopia is the condition where a person has an excessively long eyeball length. Dr Chua said this condition is irreversible, and people with myopia are at higher risk of having other eye problems such as cataracts, retinal detachments, or even blindness in later years.

Furthermore, myopia is genetic, so children with myopic parents have a higher chance of being short-sighted as well.

Mr Derik Poh, 42, a father of two, said he takes his 13-year-old daughter, who is short-sighted, outdoors on weekends.

"I take her to the beach so she won't be glued to electronic devices indoors."