My Turf is a fortnightly series that aims to tell the untold stories of our neighbourhoods. In this instalment, we look at the relative scarcity of roads and places named after women here.

Most people pass by Florence Road in Upper Serangoon without a second look, but not retired teacher Lilian Lim. After all, you can say it is her grandmother's road.

The road takes its name from Madam Florence Yeo (1887-1962), the wife of so-called bee hoon king Lim Ah Pin (1890-1943), a famous vermicelli manufacturer who built bungalows in the area. The roads there were named after the couple.

Madam Yeo was an orphan who lived in a convent, while Mr Lim came from Fujian province with his mother to join his father here. "He was looking for a Catholic girl (to marry). He was only 17, she was 19," said Madam Lim, who is in her 70s.

They had 10 children - five sons and five daughters. Madam Yeo was a soft-spoken Peranakan wife, but fought for her daughters to have a share of the inheritance, she added.

Said Madam Lim's son Desmond Sim, 56, a playwright and teacher: "That was very forward-looking of her, because women of that time, they normally wouldn't speak up."

Mr Lim had one road - Lim Ah Pin Road - named after him, but his wife had two: Florence Road and the adjacent Florence Close. 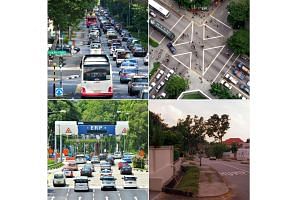 There are about 40 "female" road or place names listed in Singapore Street Names: A Study Of Toponymics, a 2013 book by geographers Victor Savage and Brenda Yeoh, compared with at least 540 named after men.

Many roads or places were named after British royalty - like Queenstown after Queen Elizabeth II, or Princess Ann Close after her daughter. Others, such as Evelyn Road and Olive Road, were christened after the wives or daughters of prominent men. As was Eng Neo Avenue in Bukit Timah.

Behind every road name is a story of Singapore

That roads here are very "masculine" reflects the dominance of men here during the colonial period, said scholars interviewed.

This was when 70 per cent of Singapore's place or road names were decided, said Dr Savage, formerly of the National University of Singapore (NUS) and now a visiting senior fellow at the S. Rajaratnam School of International Studies.

Back then, a rich man could pretty much name a road after himself.

Professor Yeoh of the NUS geography department said: "Sometimes, one or two female road names crept in because they named them after their wives, daughters or mothers.

"But that's usually not the case."

This reflected the public ethos of the new nation state. Also, there were more public roads than privately-owned ones. Roads were generally no longer named after living persons, said Prof Yeoh, as "whether they are worthy of naming is not a foregone conclusion".

Singapore is hardly unusual in having few female road names.

A 2015 analysis of road names by mapping platform Mapbox of seven cities - San Francisco, Paris, London and four Indian cities including New Delhi - found that only 27.5 per cent of streets named after people took their names from women.

The lack of female road names is likely similar in other post-colonial cities, said Prof Yeoh. But many have been "purged of their colonial names" after independence, while Singapore has kept them to reflect its colonial heritage.

The Singapore Council of Women's Organisations (SCWO), which in 2014 unveiled the Singapore Women's Hall of Fame to honour the nation's most inspirational women, thinks it is "a shame" so few roads here are named after women.

"SCWO would be happy to work with the authorities to identify the Singapore women after whom roads could be named," said Ms Margaret Thomas, chairman of the hall of fame.

When asked about this issue, the Street and Building Names Board said it does not assign names but approves applications for the naming and renaming of buildings, estates and streets from building owners and developers.

It can consider applications for naming new streets or places after outstanding people "who had made significant contributions to Singapore, in the areas of economics, the arts, sports, education or politics". It cited Zubir Said Drive, outside the School Of The Arts, which is named after the late composer of Singapore's national anthem.

The board said in general, these names should be "easy to remember, meaningful and appropriate to the local or historical context".

Indeed, Dr Savage said many considerations come into play in deciding road names, with these being important anchors of identity.

He said the naming of roads after women should not be a kind of affirmative action, noting that many Old Guard ministers have yet to be honoured in such a way.

"There should be more gender representation, no matter whether it's in politics, business or academics."

A version of this article appeared in the print edition of The Straits Times on May 25, 2017, with the headline 'My grandmother's road? Not many in Singapore'. Subscribe
Topics:
More
Whatsapp Linkedin FB Messenger Telegram Reddit WeChat Pinterest Print Purchase Article Copy permalink