She had celebrated her birthday on Friday with some of her children and two friends at her home in Siglap Plain.

Speaking to The Straits Times, her daughter, Ms Wee Eng Hwa, 75, said Mrs Wee had suffered from some breathing difficulties on Friday, which became worse on Saturday afternoon.

She was sent to Changi General Hospital in an ambulance on Saturday night but could not be resuscitated.

"They did their best, but couldn't find any pulse except for the pace maker. She's now peacefully at rest," said Ms Wee, a lawyer who lived with Mrs Wee.

"She's done us proud, done so much for us, gave us her best."

Born Koh Sok Hiong, Mrs Wee met Mr Wee in 1936, and they married the same year. The couple had seven children - one son and six daughters. 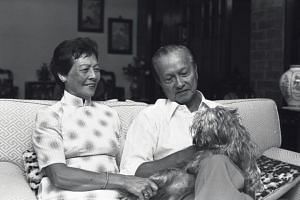 Mr Wee, who was Singapore's president from 1985 to 1993, had described Mrs Wee as his soulmate.

During their 60th wedding anniversary, he said: "She has been wife, mother, cook, tailor, washerwoman, doctor and barber of the family all rolled into one and put in almost 14 to 16 hours daily, seven days a week, 365 days a year.

"Fortunately, for me, there was then no NTUC or trade union to haul me up as a tyrannical exploiter."

The couple were known as gracious hosts, and as president, Mr Wee often invited Singaporeans to the Istana for Mrs Wee's famed Peranakan fare.

Since his death on May 2, 2005, Mrs Wee had kept busy cooking for her close-knit family and had a cookbook of her recipes, Cooking For The President - Reflections & Recipes Of Mrs Wee Kim Wee, published.

The book, which took 21 years to complete, features over 200 recipes and their variations.

Though Mrs Wee had enjoyed most of her golden years in good health, she suffered a stroke in 2015 that left her using a wheelchair.

She was also unable to eat the Peranakan dishes that she loved as she had to be tube fed.

Ms Wee said the family would move the matriarch to the kitchen whenever meals were being prepared so that she could smell and see them doing so.

"She loves Peranakan food, nothing can match that for her," added Ms Wee.

On Friday, the family threw a big celebration to mark Mrs Wee's 103rd birthday according to Chinese custom, which deems individuals as one year old at birth.

About 80 guests including friends and family turned up.

Her wake will start in the late afternoon on Sunday at 25 Siglap Plain.