SINGAPORE - A two-minute Facebook video on fire safety tips by MP Sun Xueling has been receiving praise after she posted it on Thursday (Jan 31).

The video focuses on three messages - not to stand too close to the stove when cooking, not to leave cooking unattended and to ensure there are no smoldering embers before disposing of lighted materials.

Online comments praised her mastery of the dialect, as well as the effort behind the production of the video itself.

Ms Sun, who is Hokkien, told The Straits Times on Saturday that the video had been made DIY (Do-It-Yourself) style, involving only three people: herself, an administrative staff member from the Singapore Civil Defence Force (SCDF) who was featured in the video and an SCDF firefighter who doubled as cameraman and video editor.

Ms Sun said that as Chinese New Year was approaching, and there were also two home fires recently in Punggol and Pasir Ris, she wanted to put out a message about fire safety to warn residents, so she approached SCDF.

"They told me that they had a firefighter who could do the recording, so we could do it together. I was pleasantly surprised that he also knew how to do motion graphics," said Ms Sun, 39.

Filming took two hours on Monday morning at a resident's home in Punggol, and the editing and graphics took another one to two days, done by the firefighter. The script was written by Ms Sun.

The Pasir-Ris Punggol GRC MP said they did not use professional video cameras or microphones and relied on just a small handheld camera.

"We had a lot of problems with recording the sound at first as we were filming parts of it outdoors, and for the kitchen scene, when we played it back, the sound of the cooking was louder than me and I couldn't hear myself," she added.

The team improvised by using a mobile phone and an earpiece to get better audio quality.

Ms Sun has been doing community engagements with her residents about fire safety and wanted to step up the engagement as the bulk of fires in residential homes were caused by unattended cooking or rubbish chute fires.

There were 2,008 fires reported in residential premises across Singapore in the first 10 months of 2018. 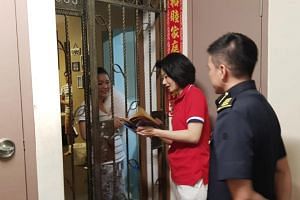 What to do in a home fire

All new homes to have smoke alarms from June

She decided to narrate the video in Hokkien with English and Chinese subtitles in order to reach out to as wide an audience as possible.

"If I did it only in English and Mandarin, I would miss out on an audience group, particularly the elderly, who during Chinese New Year would be doing a lot of cooking. I've seen for myself my own grandmother's shirt caught fire while cooking, so it is a real danger," said Ms Sun.

When asked about her choice to use Hokkien given the Government's dialect policy, she said: "The importance of language is the ability to communicate with the target audience."

"I wanted simple advisory points to go out to an audience group that I didn't want neglected because of language," she added.

Ms Sun said that she was not sure how many elderly people used Facebook but knew that her followers were mostly her young residents, so in her Facebook post, she explicitly asked viewers to show the video to their parents or grandparents.

This is not Ms Sun's first time to be featured in a safety-related video. In August last year, she also posted a Facebook video of a step-by-step guide on what to do in the event of an infant cardiac arrest or choking incident, which has garnered about 75,000 views to date.