SINGAPORE - New mothers returning to the workforce should view the attributes they have gained through motherhood as an expansion of their skill set, said employers at a careers event on Thursday (April 11).

Johnson & Johnson marketing head Joyce Lim told the gathering: "Articulate positively about what you have gone through. Prioritise these skill sets and how they are transferable to your job."

After a long career break, many mothers start seeing themselves as second rate and begin settling for jobs that do not suit their interests or needs.

She urged women to explore their employment options more, reminding them that they are selecting the firm as much as it is selecting them.

Many of the 12 companies at the event have implemented options such as working from home, unlimited leave and in-house maternity facilities to support working mothers. 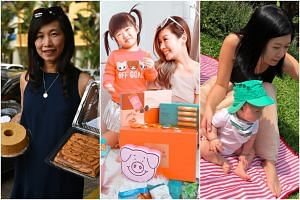 Budget roundtable: More help for older workers and mums on the wish list

When mums-to-be are not welcome at work

Career training workshops such as mock interviews, resume critique and networking opportunities were provided for the 160 mothers who attended.

A recurring concern among the women was that they would lose relevance in an ever-progressing labour force.

"When I was working, things were very traditional, now not so," said former training executive Joy Tan, 40, after she undertook a workshop on Linkedin.

While not every mother will become employed with a partnering company, Mums @ work founder Sher-Li Torrey said she hopes the event will empower women with the tools they need to continue seeking work.

She also noted that reintegration is a two-way process, adding that women must know what they need so that companies can reciprocate accordingly.

There seems to be a genuine need for women to return to work, with rapidly expanding organisations like Marina Bay Sands holding about 1,000 job opportunities, according to Ms Joyce Tan, its associate director of human resources.

Ms Tan added that as a sign of the firm's commitment to the Mums @ work cause, mothers at the event who seek to join MBS would get extra attention paid to their resumes.

Ms Simel Essen, 38, attended the previous session of this event last May.

She connected with Johnson & Johnson representatives and was so drawn to the firm's diversity that she was determined to work for it.

She once had trouble re-entering employment after a four-year break but now works in finance for the consumer products giant.

Ms Essen said the Mums @ work career event itself is definitely not an easy way out.

Despite the help it gives, her employment process took roughly a year, including a four-month probation period before becoming a permanent employee.

Nonetheless, she encouraged women to keep knocking on doors and to show that they are "determined, ambitious and want to add value to the company".