SINGAPORE - Electronic cigarettes, as well as bottles and pods containing e-cigarette juices, were found hidden in a child car seat and baby stroller in a Malaysia-registered car on Monday (Oct 14).

E-vaporisers, which include e-cigarettes and e-cigars, are battery-powered devices that heat a liquid which contains nicotine to produce a vapour that is then inhaled.

On Monday, ICA officers found the driver's behaviour suspicious and directed a further check to be carried out in the car.

E-cigarettes and related accessories were found hidden in a child car seat and a stroller. They were also found under the driver's seat and wrapped in spare clothing in the car.

The case, which involves two Malaysian women, was referred to the Health Sciences Authority (HSA).

ICA said that this method of concealment is a cause for concern as similar methods might be used by "people with ill intent to smuggle security items into Singapore". 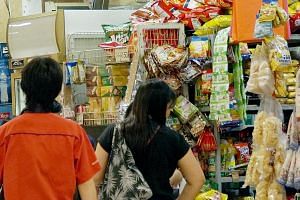 Illegal vape buyers use code words to get supplies in Singapore

Vaping-linked lung injury may be caused by toxic fumes: US study

HSA said that the street value of the seized items is about $14,280.

The authority added that it dealt with 2,387 cases involving the import of vaporisers from the start of last year to the end of August this year. The estimated street value of the vaporisers and accessories seized in that time was about $4,960.

Last month, a 35-year-old man who had committed multiple offences in relation to e-vaporisers was fined $99,000 - the highest amount ever.

Anyone found guilty of selling, importing or distributing e-vaporisers can be fined up to $10,000, jailed for up to six months, or both.