SINGAPORE - As the first anniversary of Mr Lee Kuan Yew's death approaches, groups of Singaporeans are planning activities to commemorate the legacy of the country's first prime minister.

At least 100 events are being organised by individuals and community groups for the month of March, People's Association (PA) deputy chairman Chan Chun Sing said at a press conference on Wednesday (March 2).

These activities include a tree-planting exercise at Jurong Lake Park - a nod to Mr Lee's campaign to green the country - and a brisk walk at Sembawang Park to celebrate his desire to stay healthy. The late Mr Lee had made it a point to exercise daily.

At Tanjong Pagar, the constituency Mr Lee represented for 60 years, residents and grassroots leaders will put up a remembrance site at Duxton Plain Park from March 19 to 27.

Members of the public can visit the site, which will have panels featuring photographs and text of Mr Lee's contributions to the area.

Adding to the effort of the ordinary folk are two remembrance events organised by the PA. 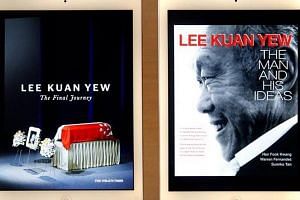 These will be held at two sites picked for their association with Mr Lee, who died on March 23, at age 91.

The sites are Parliament House, along the Singapore River, and the Istana Park on Orchard Road.

Panels of photographs and short write-ups about Mr Lee's contributions will be erected at these sites for people to reflect on his legacy.

The PA is holding these events in response to queries from several people on whether there would be any events to remember Mr Lee, said Mr Chan, who is Minister in the Prime Minister's Office and secretary-general of the National Trades Union Congress. In the week of mourning following Mr Lee's death, people waited for hours in long queues to pay their last respects.

And on the day of his funeral, thousands stood in torrential rain along the funeral route to bid their final farewell to the man many view as the father of modern Singapore.