SINGAPORE - The number of elderly people taking their own lives reached a record high last year.

Some 129 people aged 60 and older committed suicide, despite the total number of suicides declining in the same year.

Suicide prevention agency Samaritans of Singapore (SOS) provided a breakdown of the annual statistics released earlier by the Immigration and Checkpoints Authority.

The number of people taking their own lives dropped across all age groups, except for the elderly, whose number rose to the highest since suicide numbers were tracked in 1991.

Ms Christine Wong, executive director of SOS, said: "It is very worrying that many elderly are turning to suicide as the only choice to end their pain and struggles, when they should be enjoying their lustre of the golden years.

"Suicide is preventable. Most importantly, suicidal people do not want to die. They want to live so desperately, but they can't seem to find a way to. They feel like they have exhausted all their options and the pain they are experiencing is well beyond them.

"With the elderly population in Singapore increasing steadily, suicides in this population may be expected to continue rising."

Ms Wong called it a concern, adding: "We need to find out the barriers that prevent them from getting through to SOS, and if they know where and what are the other available resources to seek help."

A spokesman for Fei Yue Community Services said that most elderly people may not know who to turn to for help or how to do so, either out of ignorance or reluctance.

"Those who are aged and sick have little or no family or dependants help and are socially isolated may be more susceptible," said the spokesman.

"Most would not want to be a burden to others or would not have the means to look after themselves in their healthcare needs." 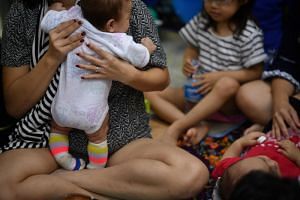 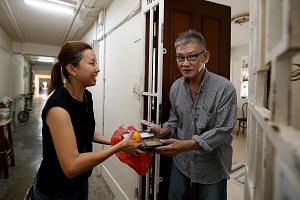 askST: What care and subsidies are available for seniors?

Ms Wang Jing, assistant director of Hua Mei Counselling and Coaching at Tsao Foundation, said that changes in family patterns could be a contributing factor to the rise in elder suicide numbers.

"For most older people, families are their closest ties and where they first turn to for help, but the family size is getting smaller and the number of elders living alone or with an elderly spouse is going up."

She added that most adult children also live busy lives and may not be able to give as much attention to parents as the elderly need or expect.

"Elder isolation is something we need to address in order to tackle elder suicide," she said. "Living with another person does not necessarily mean one does not become lonely or isolated. Interaction and emotional support are key."

The role of the community and the elderly's social support group is important, experts say. Better public education will help, said Ms Wang, adding that one way is to train volunteers who befriend the elderly to recognise signs of depression and suicide risk and to establish channels to flag people at risk to professionals.

Primary care doctors also have an important role, said Ms Wang, adding that physicians, social workers and counsellors of eldercare services should make it a point to look out for signs of emotional wellness and distress and to use standard assessment scales to identify risks and activate safety plans.

"Suicide is like an extreme situation when people want to put an end to their continuous pain and feelings of overwhelming helplessness," said Ms Wang. "If steps were taken early to manage seemingly insurmountable feelings and problems, suicide may not occur."