More people are now living with cancer than dying from it.

Although cancer remains the top killer in Singapore, accounting for three out of every 10 deaths, many cancers that were once considered a death sentence can now be cured.

Professor Chng Wee Joo, director of the National University Cancer Institute, said the focus of doctors today is "how to make people with cancer feel less like cancer patients".

This is because a significant number of people have been cured, he explained, while others "are living with cancer like people do with diabetes and hypertension".

Today, tens of thousands of cancer survivors here are living good- quality lives. In fact, treatment for some cancers is now so good that people can expect to live normal lifespans. And as research here has shifted into high gear, the prognosis for patients can only get better.

More than $200 million has been invested in cancer research over the past decade, with promising results. Last year, for instance, a new cancer drug developed by Singapore researchers that targets multiple cancers entered clinical trials. 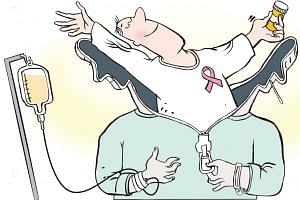 Taking the fight to the enemy with lab-grown tumours

There are now vaccines that can significantly reduce the risk of certain cancers, while scientists are developing drugs specifically targeted at the proteins or mutations linked to specific cancers. Such targeted therapies focus on a sub-type of cancer, and success is generally higher.

The Straits Times is running a series on cancers starting today, with an overview of the disease in Singapore, which has among the best survival rates in the world for many cancers.

This will be followed every Wednesday with stories on different cancers, focusing on prevention, available treatments and what the future holds in terms of new treatments.