In the past decade, a steadily growing number of Singaporean women have found a foreign Mr Right.

Last year, there were 1,622 marriages between Singaporeans and a non-resident groom - a 39 per cent jump from that in 2005.

The key reason is the increasing numbers of Singaporean women studying or working abroad, said sociologists, marriage counsellors and marriage solemnisers. There is also a sizeable group of foreign men working in Singapore, so there are more chances for both sides to meet.

The rising trend of more Singaporean bride-foreign groom couples is in opposition to the declining wave of Singaporean groom-foreign bride couples.

Couples in the former group tend to be more evenly matched in terms of education, income levels and cultural references, said those interviewed. They may have met in school or at the workplace. The foreign grooms are usually professionals from all over the globe.

On the other hand, the second group of couples seem to face more challenges, especially for lower-income pairs who may not have a strong foundation in their relationship.

Institute of Policy Studies senior research fellow Mathew Mathews said as more women wed foreigners and stay happily married, more will be open to the idea of settling down with a foreigner. 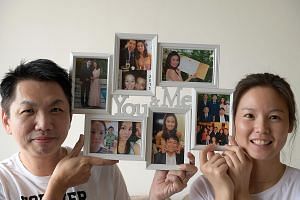 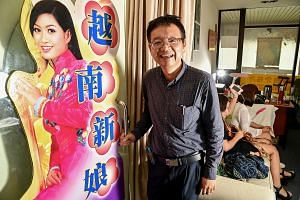 Matchmakers singing the blues as Vietnam brides fall out of favour

Likewise, as more men realise that marrying a foreign woman they may not know well can be fraught, fewer have been doing so, he added.

Men are still seen as the breadwinner in Asian culture and women generally expect their husbands to provide for the family, said Mr Justin Paul, a social worker at Fei Yue Community Services, which runs programmes for transnational couples.

Dr Mathews said: "There is the notion that men are intimidated by women who are more qualified, especially if they value a hierarchical relationship in which the husband is the leader of the marriage."

Singaporean Zhang Yunxi, 28, was on a tour in Europe when she met her husband, a Pakistani, then studying in a university in London.

She stayed with a host family she had found through a couch-surfing website and he knew her host.

Ms Zhang was surprised to find herself falling in love with a foreigner and battling the odds till the pair were married. For example, the pair had to spend long stretches apart.

Her husband, Mr Nauman Pasha, 27, has since moved to Singapore and is now working as a designer in an events company. The pair wed here last year .

Ms Zhang said her parents did not have any major concerns about her relationship although her husband's parents were "slightly worried" he was marrying a foreigner of another race.

But the worries were eased after her in-laws got to know her better. She said: "They have been very accepting towards me."

A version of this article appeared in the print edition of The Sunday Times on November 13, 2016, with the headline 'More S'porean women saying 'I do' to foreigners'. Subscribe
Topics:
More
Whatsapp Linkedin FB Messenger Telegram Reddit WeChat Pinterest Print Purchase Article Copy permalink