This was an increase in the number of people who went for such courses in 2015, said the agency, which spearheads the national drive for skills upgrading.

More funding also went towards subsidising these courses last year. Together, both agencies provided about $456 million in direct training subsidies - a 20 per cent increase from 2015.

Most of this money was used to help subsidise course fees, although around 9 per cent went directly to individuals through measures such as SkillsFuture Credit.

The SkillsFuture Credit scheme, which was introduced in January last year for more than two million people, gives Singaporeans aged 25 and older an initial $500 credit to pay for skills courses.

SSG published these figures in its first report on the State of the Training Industry, which was released on Thursday.

It found that popular areas of training included information and communications, service excellence, and education and training.

It also carries out post-training surveys to those who participated in Singapore Workforce Skills Qualifications training.

The WSQ is a national system that  trains, develops, assesses and certifies workforce skills and competencies. 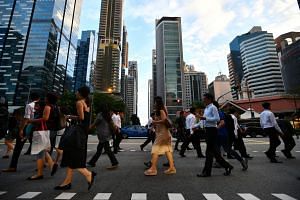 "Based on the 2016 post-training survey results, most of these individuals and companies found the training useful to their work," said Mr Ng Cher Pong, chief executive of SSG.

"As we continue to invest heavily in SkillsFuture, we will expand the tracking of training outcomes and how the skills acquired are utilised at workplaces."

SSG said that it will expand post-training surveys to cover all training places funded by both agencies.