The number of workplace deaths a month is at its highest for this year, with eight fatalities last month.

The death toll was revealed by Minister of State for Manpower and National Development Zaqy Mohamad in a Facebook post last Thursday.

Seven of those workers who died on the job were foreigners.

The surge in fatal workplace accidents has caused concern and alarm, as it is a sharp spike from the 17 fatalities in the first half of the year.

Mr Zaqy said he was "deeply concerned" about the situation.

"Eight workers have lost their lives while on the job," he said. "Most of these cases happened in high-risk industries such as construction and marine."

He added that the Ministry of Manpower (MOM) will be stepping up enforcement efforts by conducting an additional 400 inspections in high-risk sectors this month and the next, on top of regular inspections.

Mr Zaqy urged stakeholders to stay vigilant in the light of the festive season, during which work activities may be increased to meet production schedules.

"The safety of our workers is our utmost priority," he said.

"We urge construction firms to heed the Singapore Contractors Association's call to conduct a safety timeout and take stock of safety procedures at project sites."

Mr Zainal Sapari, deputy chairman of the Government Parliamentary Committee for Manpower, told The New Paper (TNP) last Thursday that it was alarming to see a spike in workplace accidents, especially when the target is to reduce such accidents to less than one for every 100,000 workers by 2028.

"Any accident, especially those causing serious injuries or fatalities at a workplace, must be thoroughly investigated to identify the root causes, including difficulties companies are facing to implement sound and effective work safety measures at the worksite," he said.

"I would be concerned if work safety was compromised if a company had done it as part of cost-cutting measures, given the competitive bidding that is taking place for contracts." 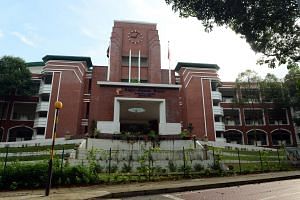 Worker falls to his death at Shaw Plaza in Balestier Road

The most recent death took place last Tuesday, when a 29-year-old Indian national died after falling into the cargo hold of a vessel that was under repair.

The accident happened at about 9am, when he fell over the edge of a deck and plunged 9.3m to the bottom.

He was taken to hospital where he later died.

Ms Dipa Swaminathan, the founder of the social enterprise initiative ItsRainingRaincoats, which focuses on migrant worker issues, said the number of deaths was deeply distressing.

"(November) has been a nightmare for us. Our prayer each day is that there should be no worker fatality," she told TNP.

"But six out of the 30 days (in November), that prayer has gone unanswered, and coffins leave Singapore with the bodies of men who came here with the simple dream of earning a living.

"We hope this nightmare will end soon."