Times are not good for minimarts and convenience stores this year, even though the economy looks to be improving.

For every month from January to July, sales at these stores have fallen from a year ago, latest figures from the Department of Statistics show. This contrasts with the same seven-month period last year, where year-on-year sales fell only in May.

The reasons for this decline range from online shopping to weaker consumer sentiment to competition from supermarkets, said stores.

The Straits Times visited 10 minimarts in various locations and spoke to a few chain stores, and found that sales at minimarts have dropped by about 20 per cent compared with last year, with one reporting a drop of at least 50 per cent.

Mr Raja Merimuthu, 32, manager of Chennai Trading and Supermart in Boon Lay, said that his store saw a 10 to 20 per cent drop in sales compared with last year.

The number of local customers has not changed much, but Mr Raja said fewer foreign workers patronised the store and this caused sales to fall. 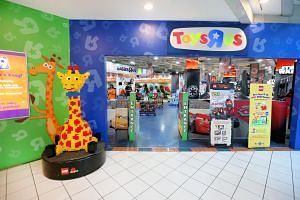 They had moved to dormitories and no longer lived in nearby residential blocks, he explained.

Mr Toh Hong Aik, managing director of the UMart franchise which has 45 minimarts islandwide, said that the biggest reason for the drop in his chain's business of about 10 per cent was linked to the economy.

Even though the economy might generally be doing better, consumers are still wary and unwilling to spend much, for fear that things could get worse, he said.

Mr Alan Tay, chairman of the Minimart Association, said minimarts that do not join a franchise would find it hard to thrive, as they would not benefit from economies of scale.

This has resulted in consumers like Ms Jenny Tan shopping at supermarkets once or twice weekly, and hardly visiting minimarts now.

"Prices at minimarts are higher and they don't provide a one-stop service offering both wet and dry food," said the 51-year-old executive in the aerospace industry.

Convenience stores have not been spared from the retail challenges.

Cheers saw a single-digit drop in sales in the first half of the year compared with last year, and said it could be due to the rise in online shopping and an increase in the number of 24-hour supermarkets.

A 7-Eleven spokesman said the restrictions on alcohol and cigarettes, coupled with softer consumer sentiment, have created headwinds in the retail sector. However, he said that 7-Eleven is still on track to meet its targets.

To understand the drop in business experienced by minimarts and convenience stores, one needs to look at the word "convenience", said Ms Esther Ho, deputy director at Nanyang Polytechnic's School of Business Management.

She said the benefit that convenience stores offer consumers - in terms of location - is likely being eroded now that there are many 24-hour coffee shops, supermarkets and petrol station stores.

For convenience stores and minimarts to survive, she said, they should explore strategies such as branching out into other products like prepared food, or using technology in new ways, such as communicating shopping deals via WhatsApp. This would allow them to continue providing an updated form of convenience, added Ms Ho.

"If you look at today's consumers, they're very open to prepared food. So, maybe a premium convenience shop that offers fast or prepared food is an area of consideration," she said.

In fact, selling more ready-to-eat meals is what Cheers and 7-Eleven are doing.

Still, minimarts have their loyal fans. Said airport immigration officer Kelvin Koo, 45: "They're convenient, with friendly service, and their prices are reasonable. There's a minimart downstairs from where I live, so I can just drop in."