SINGAPORE - Eliza loved working at the minimart in her school.

Thus begins the children's book by local author Lianne Ong entitled I Can Help You, which was launched on Thursday (March 21) in conjunction with World Down Syndrome Day.

The story revolves around Eliza who, while on her way home, finds out that Uncle Hock Seng, the kind owner of the minimart, has suffered a bad fall and is wheelchair-bound. She then has the opportunity to show off her proficiency at stocking shelves as well as at counting the cash, something she learnt in her special needs school.

The book is based on the in-school minimart set up in 2003 at the Movement for the Intellectually Disabled of Singapore (Minds) Lee Kong Chian Gardens School to teach special needs students the same vocational skills which Eliza demonstrated.

The minimart, which on Thursday was opened for the first time to invited guests including MP for Tanjong Pagar GRC, Ms Joan Pereira, serves as a training ground for intellectually disabled students aged 13 to 16.

The next-door thrift shop, which is open to the public, also serves as a training ground for older graduates aged 18 and above. Their stint in the shop could be a stepping stone to employment at McDonald's, the fast-food restaurant chain, or Giant, the supermarket chain, as well as other bigger establishments.

Minds has about 2,400 students, 20 per cent of whom have Down syndrome, a genetic condition. 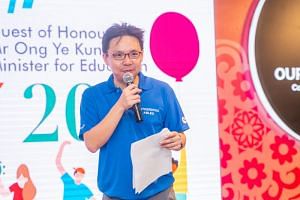 People with the condition typically have certain common physical attributes which are illustrated in the book by Mr Nicholas Liem.

"We wanted to depict Down syndrome in a truthful and respectful manner," said Ms Ong.

The book is the second in a six-part series of children's storybooks entitled A Place For Us which were commissioned by Minds.

Ms Pereira on Thursday shared her experience of being saved from a bout of stage fright by a supportive boy with Down syndrome. When slated to recite a speech on World Speech Day last Friday, she froze. Ms Pereira recalled the ensuing silence until a little boy in the audience started clapping and cheering for her. With that, the words came freely and she managed to complete the speech.

She expressed how heartwarming it was to be on the receiving end of such a compassionate act. "We must not leave the intellectually disabled behind," she said, "just like they will never leave us behind."

The father of 17-year-old Milford Loh, who was the cashier when Ms Pereira paid for two bottles of Fuji Apple drink from the minimart, was among the proud parents on Thursday.

"I'm very proud of him, not just because he is independent but because his achievements have now surpassed mine," Mr Loh said.