How often have you heard that refrain used on people struggling?

But for many young people here, statistics suggest that having a job is no guarantee of a crawl out of poverty. This mirrors a pattern observed recently in developed countries such as Britain and Italy.

As of June last year, there are 41,500 people who are aged between 15 and 34 who have a gross monthly income (excluding employer Central Provident Fund contribution) of below $1,000.

In Singapore, a youth is defined as anyone between the ages of 15 and 35.

Across all age groups, the number of people drawing such low pay has fallen, according to the annual Labour Force in Singapore reports released by the Manpower Ministry. 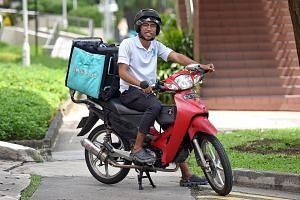 Dispatch rider, 23, plies the roads with a prayer and a dream

While the problem appears to be shrinking, those aged 25 to 34 showed the smallest percentage point drop, meaning that younger workers are slower in breaking out of this low-income bracket compared to other age groups.

So while they have a job, a number of them struggle to support themselves and their families.

Data from ComCare - a national social assistance programme for the low-income - also shows that more than a quarter of short- to medium-term assistance applicants in the financial year of 2015 were getting aid even though they were employed.

While the data clearly signals an issue, there are gaps in public information that could help us understand what contributes to poverty entrenching itself with the young. For instance, why do some young people continue to pull in meagre wages? Why do some with jobs still require financial assistance? A better understanding of the circumstances and obstacles the young and poor face will allow for resources and intervention to be more targeted.

Depending on the root causes, programmes can be tailor-made, whether it is to support them in re-skilling or upgrading their skills to get better jobs and higher wages.

Or perhaps the issue is a structural one and there may be a need to "strengthen Workfare and the Progressive Wage Model further", said Minister for Social and Family Development Tan Chuan-Jin previously.

For a start, it will be useful to track the length of time that people are on welfare aid.

The results should also be published to help policymakers and social workers understand the effect various initiatives have on weaning young people, and their families, off ComCare.

While some families start on "short term" help, they appear to end up being dependent for years.

Again, a clear understanding of why they find themselves in that situation will help ensure that the majority of needy families and individuals graduate out of the short- to medium-term financial assistance scheme instead of moving on to the long-term public assistance scheme.

Beyond income data, another useful tool to understand the young and poor situation in Singapore is the take-up rate of public rental housing, meant for low-income families, by this group.

But here, too, there are more questions. How long do young people live in these rental flats? Were their parents public rental housing tenants, too?

Tracking these data will help in understanding the intergenerational transmission of poverty. Early intervention can ensure that young individuals and families do not get mired in poverty, especially in the productive phase of their lives.

At present, we can only draw an inference of the gravity of the problem.

For instance, the Housing Board told The Sunday Times that nearly 3,000 rental tenants have progressed to first-time home ownership in the past five years. Given that there are 56,000 rental units today, this is but a small fraction. Does this mean that many of the rental flat residents end up living there for years and have a slim chance of owning their own homes?

Some people have blamed the rise of the gig economy - where conventional jobs are replaced by freelance, on-demand "gigs", or short-term projects - for depressing wages and exploiting the young as such workers may not receive the usual medical and leave benefits and CPF contributions that come with full-time work.

Again, there are questions.

With the rise of the gig economy, what is the proportion of young Singaporeans not contributing to CPF? Have their numbers gone up over the years? Of those who do contribute, are those amounts enough to see them through their golden years?

Age-centric data can shed light on how various segments of the population are faring.

With more precise information, we will be better able to detect demographic shifts in profiles of the poor, gauge the effectiveness of existing help schemes, pinpoint new areas of need and channel public funds and charity dollars to those who need them the most.