SINGAPORE - Wearing a neatly ironed grey shirt and a gleaming pair of dress shoes, construction worker Veerasamy Murugan, 28, could barely hide the grin behind his face mask as he prepared to board the bus in Mandai on Wednesday (Sept 15) morning.

For the first time in 1½ years, he was stepping out of his dormitory not to go to work but to take a quick jaunt to Little India, his regular haunt until Covid-19 spread like wildfire in the dorms in April last year and sparked a months-long lockdown.

"Inside my room, I am thinking about friend problems, family problems. Outside, I feel free," the Indian national told The Straits Times.

"Today, I'm very happy to go out. First, I will go to pray and then I will relax."

Mr Murugan was among 39 migrant workers who were the first to take part in a pilot scheme allowing workers living in dorms here to return to the community after more than 17 months of movement restrictions kept them largely to their dorms.

Thirty-five workers from Westlite Mandai dormitory and four from The Leo dormitory were bussed to Little India and dropped off in Race Course Lane.

Another group of about 60 workers from Westlite Mandai and S11 dormitory visited Little India in the afternoon.

"This is milestone for us," said Mr Tung Yui Fai, chief of the Ministry of Manpower's (MOM's) Assurance, Care and Engagement (Ace) Group.

He then went to department store Appollo Sellappas, popped by Western Union to wire money home, and had mutton briyani at Chettinadu Restaurant, which he said tastes most like the food from his home town in Tamil Nadu state.

Sri Veeramakaliamman Temple chairman K. Shekaran said the temple is closely associated with migrant workers from India, and it used to host about 10,000 workers on Sunday evenings before the pandemic.

This has shrunk to a negligible number now, he told reporters.

The temple also used serve up to 500kg of free food to migrant workers and devotees. This food was mostly sponsored by donors and shopkeepers in Little India.

"By bringing the workers back, it also helps us bring the community back together to work with the temple," said Mr Shekaran.

"We have actually been looking forward to the day when we can welcome (the workers) back, and also give them the spiritual comfort that they have been longing for for the last 1½ years."

"This is a new beginning and hopefully we will see more of them," he added.

The temple has been working with MOM to facilitate the pilot scheme and it has arranged for a blessed bath for the temple's deity to take place during closing hours for workers who arrive in the afternoon.

"While we are not able to perform the full religious service, at least we are able to offer them something that they can see, and they can have a prayer and feel blessed having come to the temple," Mr Shekaran added.

Mr Rajaji Mahalingam, 28, is usually not awake until the late morning on his day off.

On Wednesday, however, the construction worker was up at 6.30am and brimming with excitement as he prepared for his visit to Little India.

His one regret is not being able to meet his cousin while out in the community.

His cousin, 25, lives in temporary quarters at a worksite in Tuas and they have not met since the dorms were locked down last April.

"It is very hard for me not seeing him. Before Covid-19, we used to meet three to four times a month," Mr Rajaji said.

"My family also feels bad for us because we live in the same country but cannot see each other."

"Last time, many people, many friends here. Now it is very quiet."

At about 6.30pm, several workers from Westlite Mandai dormitory were seen milling at an open plaza affectionately known as Bangla Square while waiting for the bus to take them back to their dorm at 7.30pm.

Many were holding plastic bags with the spoils of their shopping sprees at nearby Mustafa Centre after they arrived at about 3.30pm.

Mr Islam Kohinur, 31, bought everything from T-shirts to shoes to cologne. These items are not sold in the minimart in his dorm, the Bangladeshi said.

Mr Khan Sabur, 37, also went shopping at Mustafa Centre before heading to a restaurant to have some chappati. “We always eat rice (in the dorm), so it is something different.”

However, with only about 100 workers visiting Little India on Wednesday, shops in the area lamented that business was still slow.

Mr Md Nashirul Islam, who owns a travel agency and grocery shop in Lembu Road said the area is still very quiet and he did not get any dorm residents in his shop.

Mr Rama Murthy, the director of Chennai Trading and Supermarket, said only one worker from the pilot had shopped at his store in Dunlop Street. The worker  bought groundnuts and was given a 5 per cent discount.

“Today is a weekday. They will probably buy more over the weekend,” he said.

If the pilot succeeds and MOM increases the number of workers allowed in the community,  there will be some impact, he added. 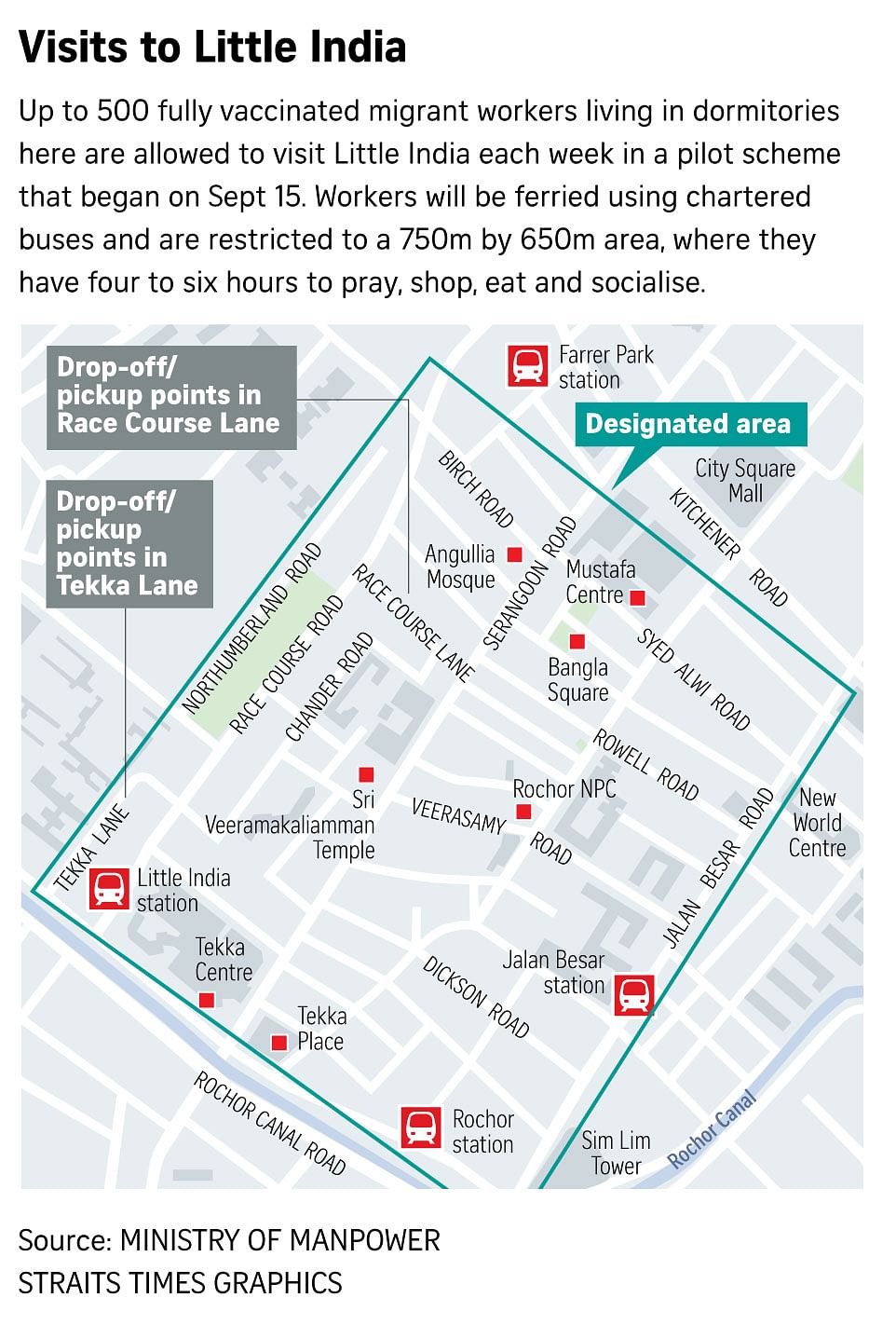