SINGAPORE - Department store Metro will close its flagship store at The Centrepoint next month, after five years as the mall's anchor tenant.

Its departure comes after several other tenants also announced plans to move out, including Times Bookstores and TianPo Jewellery.

A spokesman for Metro told The Straits Times that it will not be renewing its lease at Centrepoint, leaving it with two other department stores here at Paragon and Causeway Point.

"In recent years, Metro has been rationalising its retail business in response to changing market conditions... Metro continues to focus on its core businesses of retail in Singapore and Indonesia, together with property investment and development," the spokesman said.

The store, which spans six floors, was advertising clearance sales of up to 85 per cent off when ST visited on Saturday (Aug 24).

Staff said that its last day will be on Sept 15, and that they were unsure of whether they would be transferred to the other two stores.

Elsewhere in the mall, at least eight units appeared to be vacant, while others like Times Bookstore and TianPo Jewellery advertised their own moving out sales.

Retailers and sales staff that The Straits Times spoke to on Monday (Aug 26) speculated that low traffic at the mall may have been behind Metro's decision to leave.

ST understands that at least four other tenants, including restaurant Crystal Jade Kitchen and toy store The Better Toy Store, have moved out in the last three months.

Crystal Jade said that "business was brisk and performing to expectations", but it is exploring other locations to reach out to a different audience. It will be opening a new restaurant at Funan mall in the last quarter of the year. 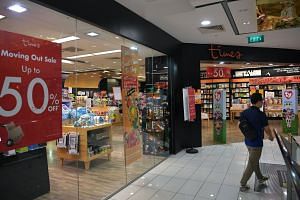 Times Bookstores will close Centrepoint branch in September after 36 years

The Centrepoint to get $50m makeover: Here are 5 facts about the shopping mall

A spokesman for The Centrepoint said that it has plans to introduce "experiential retail concepts with new lifestyle offerings", in line with the larger rejuvenation of the Somerset precinct as a youth hub.

Changes to its tenant mix will see a new anchor tenant with "an immersive and experiential concept", as well as co-working services and new products and experiences, it said, adding that more details will be announced later.

It did not respond to queries on the mall's current occupancy.

The shake-up comes just three years after The Centrepoint completed a $50 million revamp that gave the 36-year-old mall a facelift, new stores and zones focused on things like fashion, beauty and dining.

Retail experts said that both Metro and Centrepoint have fallen behind the times.

Associate Professor Ang Swee Hoon of the National University of Singapore Business School said the department store's merchandise offerings have not kept pace with the preferences of the younger generation.

"They are either too dated or found in other department stores, " she said, adding that Metro Centrepoint also has to compete with its sister location at the nearby Paragon mall.

Centrepoint's positioning is not well-defined, and the loss of its anchor tenant gives it the opportunity to rethink the mall's identity, he said.

"Can it just attract another department store chain, or should it rethink the mix?"

Prof Ang said the mall has not been the same since its previous anchor tenant - Robinsons - vacated in 2014.

"When Robinsons left, Centrepoint probably lost a bunch of those loyal customers. And with that, other tenants in the mall also suffered as they lost the patronage too," she said, adding that the two department stores cater to different crowds.

Competition from surrounding malls that have come up in recent years has also drawn shoppers away.

"313 @ Somerset and Orchard Central appeal to the younger crowd with stores that are not as commonly found elsewhere," said Prof Ang.

Still, The Centrepoint has a good location near Somerset MRT station that can be used to its advantage, she added.

"It needs to consider how to lure MRT passengers to the mall instead of just stopping at 313."