The first batch of about 80,000 Merdeka Generation Package welcome folders will be available for collection at community events from June 2, Senior Minister of State for Health Amy Khor announced yesterday.

The rest of the 500,000 or so folders will be sent out by SingPost later in the month, she said.

Dr Khor was speaking on the sidelines of a visit to the factory where the folders were being prepared by Medialink Printing Services.

The folders include personalised Merdeka Generation cards which qualify holders for outpatient care subsidies at general practitioner (GP) and dental clinics under the Community Health Assist Scheme (Chas) from Nov 1, regardless of income or the value of their homes.

The Merdeka Generation Package was announced earlier this year by Finance Minister Heng Swee Keat during his Budget speech and is aimed at offsetting healthcare costs that come with ageing.

It includes an annual $200 top-up to the Medisave accounts of eligible Singaporeans for five years, from this year to 2023. The first top-up will be automatically credited in July. 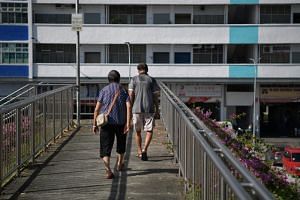 Dr Khor said: "Our Silver Generation Office started their outreach to the Merdeka Generation seniors from April this year. To date, they have engaged close to 40,000 seniors, mostly through house visits and face-to-face engagements."

She added that engagement sessions are likely to continue until the end of next year and that all of the welcome folders should be sent out by the end of July.

The folder will also contain a list of six Chas clinics nearest to the home address of the person receiving it, said Ms Sim.

The list will include four GP clinics and two dental clinics.

Ms Sim added that the folder will also contain - printed in all four official languages - a thank-you card from Prime Minister Lee Hsien Loong, a booklet detailing the Merdeka Generation Package benefits and a leaflet on courses and activities that seniors can sign up for using the one-off $100 top-up for their PAssion Silver cards.

A version of this article appeared in the print edition of The Straits Times on May 25, 2019, with the headline 'Merdeka Generation to start getting cards from June 2'. Subscribe
Topics:
More
Whatsapp Linkedin FB Messenger Telegram Reddit WeChat Pinterest Print Purchase Article Copy permalink