He describes how he communicated with Lee Hsien Yang on issue, saying the latter seemed to support some ideas

Deputy Prime Minister Teo Chee Hean said yesterday that both he and Mr Lee Hsien Yang had spoken of a memorial park at the site of the house of founding prime minister Lee Kuan Yew as being one of a range of intermediate options.

He also said the Government and Mr Lee Hsien Yang seemed to agree there was no need to make a decision on demolishing the house now, as Dr Lee Wei Ling is still living in it.

Given these points of agreement, he said, there was no need to disagree on studying options for the time a decision needed to be made on the fate of the house.

Mr Teo also said in his statement that the ministerial committee set up for the task was not bent on preventing the demolition of 38, Oxley Road, as may be believed by Mr Lee Hsien Yang, the late Mr Lee's younger son.

He made these points in a statement responding to Mr Lee Hsien Yang's Facebook post earlier in the day, in the ongoing dispute involving Prime Minister Lee Hsien Loong and his two younger siblings.

Mr Lee Hsien Yang wrote that he and his sister, Dr Lee, had never asked the Government to demolish the house right away.

He also said they had offered to build a memorial garden on the site after Dr Lee moves out and the house is demolished. But Mr Teo "was reluctant and did not pursue the discussion further", he added.

ALLEGATIONS WILL BE ADDRESSED IN PARLIAMENT: PM LEE

My siblings continue to make allegations about what I supposedly did or did not do. They are mostly inaccurate. As I earlier said, I will be making a statement in Parliament on July 3. I will, at that time, deal with the allegations that need to be addressed. 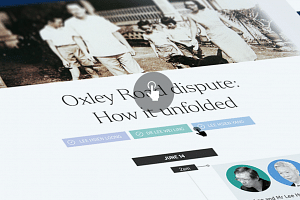 Yesterday, Mr Teo, who chairs the ministerial committee, described how he had communicated with Mr Lee Hsien Yang on the issue of the Oxley Road house, adding that Mr Lee Hsien Yang had seemed supportive of some of the intermediate options the committee was studying.

He said he met Mr Lee Hsien Yang several times between April and July 2015, and informed him that PM Lee had recused himself on government decisions on the matter.

"I also informed him that no decision is needed now. Dr Lee Wei Ling is living in the house, and a decision made prospectively by the current government could not bind a future government."

From Mr Lee Hsien Yang's Facebook post yesterday, it appears he agrees a decision on the house need not be made now, said Mr Teo.

"So there is no difference of views between Mr LHY (Lee Hsien Yang) and the Government on when a decision is to be made," he added.

Mr Teo had explained the committee's responsibilities several times since the dispute between the Lee siblings went public earlier this month, and the two younger siblings accused the committee of harassing them at the Prime Minister's bidding.

Yesterday, he reiterated that the committee was set up to study and lay out the range of possible options for the house, and present them to the Cabinet.

"Cabinet will only decide on which option to choose, when the time comes for a decision to be made on the house," said Mr Teo.

The committee had written to the two younger siblings to clarify that it would list the various options and study their implications, he added.

To illustrate, it highlighted in writing that converting the house to a park would require studying the implications on the area, including for planning and zoning, he said.

Mr Teo said he had also verbally told Mr Lee Hsien Yang his personal views on some of the options, like demolishing the house but keeping the basement dining room with a heritage centre attached.

"My objective was to let him know that the Government was not bent on retaining the house as he seems to believe, but that we are calmly and objectively examining a range of options," he said.

Addressing Mr Lee Hsien Yang's point on the memorial park, Mr Teo said he does not recall which of them made the suggestion. But, he said, Mr Lee Hsien Yang is "mistaken that I expressed reluctance".

"I said that I personally did not support the options on the extreme ends of the range - preserving the house as it is, or demolishing the house to redevelop it for new private residences," said Mr Teo.

There are, indeed, a range of viable intermediate options, and Mr Lee Hsien Yang "seems supportive" of some that the committee is studying. "So, there should be no need to disagree on studying the options for the time when a decision needs to be made."