Singapore has a package of measures ready to help businesses and workers should the world economy take a nosedive.

Deputy Prime Minister Heng Swee Keat, in disclosing it, said the trade row between China and the United States has cast a pall on the global economy and the Cabinet has been discussing Singapore's recent slowdown.

A fortnight ago, the Government's flash estimates showed that Singapore's economy grew only 0.1 per cent in the second quarter of this year, the lowest in a decade and well below analysts' expectations of 1.1 per cent.

But Mr Heng, who was speaking to visiting Malaysian journalists last Saturday, said: "We are ready with a package to help our businesses and help our workers should the global economy take a sharp downturn. We always have to be prepared."

The Deputy PM, who is also Finance Minister, did not give details of the package during the interview, a transcript of which was released to the media yesterday.

Singapore's financial regulators have also been keeping a close eye on the movements of global financial markets, where investors are "a lot more jittery than before", he noted. "We have to be alert to all these changes that are happening" and to be prepared for the worst while hoping for the best, he added.

But Singapore is not expecting a full-year recession at this point, he had said earlier this month. 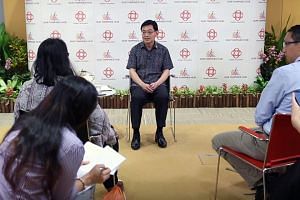 During the 2008 global financial crisis, the Government pledged $2.9 billion to help workers and businesses cope, followed by a further $20.5 billion Resilience Package in January the following year. The money was pumped into saving jobs, stimulating bank lending and enhancing business cash flow, among other measures.

The eight journalists, who met Mr Heng as part of this year's Malaysian Journalists Visit Programme, also asked for his views on issues such as the relationship between Singapore and Malaysia, domestic politics and disputes in the South China Sea.

On bilateral ties, he said there are areas of difference, but there is also a willingness to look at areas where Singapore and Malaysia can cooperate. He added that differences between such close neighbours will crop up from time to time.

"What is important is for us to resolve this as objectively and rationally as possible," he said. "It is important for us to see the broader strategic picture, which is, by cooperating with one another closely, we can actually achieve more together."

He said Malaysia and Singapore, along with the rest of Asean, can work together to maintain regional stability and relevance, boost economic development and build stronger ties between their peoples.

Peace and stability are critical for future development, he said, stressing the importance of establishing a "clear vision of where Asean is going and how Asean can maintain its relevance on the global stage".

"Asean member states do not want to take sides in any major disputes between the big powers," he added. "But we are open to working with everyone who wants to achieve win-win outcomes with Asean and Asean member states."

For economic development, Asean states need to build on what has been established under the Asean Economic Community and seize opportunities in areas like the digital economy, he added.

Another key area of cooperation is to forge deeper understanding among the peoples in Asean.

He also stressed the importance of working out a Code of Conduct regulating activities in the South China Sea which all parties can agree on, adding that it is important they do all they can to avoid escalating tensions. "Peace and stability are fundamental to the development of our economy and to the development of better relations," he said.