In an age of disruption, the second wind for the Singapore economy will come if its people are innovative and enterprising enough to compete with the world's best, such as start-ups in Silicon Valley.

That was a view held by some among the audience of 400 at a dialogue with Prime Minister Lee Hsien Loong at The Arts House yesterday, moderated by The Straits Times' editor-at-large Han Fook Kwang.

But what more, EDB Society member Johan Wong asked, could the Government do to boost entrepreneurship, when mid-career people wanting to strike out on their own were bogged down by family and financial commitments?

PM Lee noted this was "an old question" that had been raised when he chaired an economic committee after the 1985 recession.

"Then the proposal was what we should do is, 'Encourage us and if we fail, you look after us.' But the whole idea of entrepreneurship is that you dare to take risks. If we remove the risk, then you are not an entrepreneur," he said to laughter. 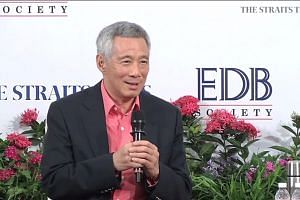 PM: Search for next leader progressing 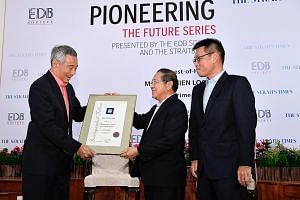 Genuine entrepreneurs, Mr Lee noted, go for broke - because they are still broke. But as Singapore was now "not broke", people had become so "settled" in life that they were more careful about taking risks. However, "if you don't take risks, you are going to go nowhere".

Being chary of trying new things, he felt, stemmed from the fear others would "look askance" at them or hold them responsible for flubbing.

Some in the audience noted that officials these days seemed keener not to "rock the boat" than pioneers like Lee Kuan Yew, Goh Keng Swee and Hon Sui Sen. "They were... mavericks who could push and make things happen," Mr Lee said.

Today, such a maverick mindset was needed in the public sector more than ever, he noted. But it is not so easy to push for change as things had become "more settled".

Mr Lee said there continues to be "a lot of trial and innovation" in shaping policies, such as in developing the city, economic policy, the healthcare system, and housing, but "we have to be more willing to do it across the board". This is where ministers and permanent secretaries would do well to give officers the confidence that they will be supported if they try new things with good judgment and the best of intentions, even if things do not turn out well.

"Very often in such situations, we have an outcry," he noted. "The officers in question are berated, disciplined, hung, drawn and quartered - I only exaggerate slightly."

"We must have the gumption and the confidence to stand up and say, 'In this case he did wrong, I've taken disciplinary action. That case was not wrong, I will defend him,' " he added.