As people continued to arrive at the Padang through the day to endure waits of up to 10 hours for their turn to pay their last respects to founding Prime Minister Lee Kuan Yew in person, the crowds swelled beyond control last night.

At about 10pm, the organisers announced that they were "temporarily suspending" the queue to clear the backlog of people who were even spilling over into the MRT station at City Hall. 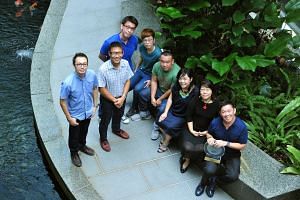 A statement from the organising committee said that the decision was made "to ensure safety of individuals due to the large crowds, and to limit the physical discomfort of the long wait, especially for the elderly and young children".

"We would like to accommodate as many as possible in this overwhelming outpouring of respect and love for Mr Lee Kuan Yew," the statement said.

"We are appealing for patience and understanding as we work to ease the situation. We will inform the public when the queue is open again."

As of press-time, the queue had not been reopened.

Mr Jeremy Ng was trapped with his wheelchair-bound mother Lee Khar Lee outside the Padang, as people did not heed calls to exit the line.

"We can't go forward, neither can we go backwards," he said.

Others, like Dr Tang Yao Liang, 31, decided not to join the queue at all, once the suspension was announced.

"We decided to cut our losses. We really wanted to show our respect as it's quite a historical moment, so I'm disappointed. But we tried our best," he said.

Mr Lee's body is scheduled to lie in state until 8pm today.

But since Wednesday, the number of people streaming in has defied expectations and forced organisers to expand the scope of their plans repeatedly.

More than 290,000 people have visited Parliament House in the last three days.

Throughout the day yesterday, the organisers issued advisories asking members of the public not to join the queue at the Padang. Instead, they were told to visit one of the 18 community tribute sites across the island.

Meanwhile, a live-stream of proceedings at Parliament House began broadcasting at noon yesterday, and people were encouraged to watch it.

But few seemed to have heeded the call to stay away.

Organisers are bracing themselves for another surge today - the last time that visitors can file past Mr Lee's casket with a bow, a prayer or a silent word of farewell - as the final hours tick by and the weekend begins.

Even after the suspension is lifted, it is unclear what time the organisers will close the queue to Parliament House today.

They declined to confirm whether those arriving at the queue's start point after 8pm will be turned away.

Mr Lee's funeral procession is to start at 12.30pm tomorrow, and the set-up for the 15.4km procession to the University Cultural Centre, where his funeral is to be held, will require a substantial amount of time.

"I knew they were telling us not to come," said Singapore Polytechnic lecturer Fan Ay Deng, 34. "But there is only one chance to see his casket, it's as simple as that. And I think a long wait is worth it to pay my respects to the founding father."

The sight of hundreds of thousands of Singaporeans, taking time off from work to stand in line for up to 10 hours, for a few fleeting moments next to Mr Lee's casket, is one that will likely never be witnessed again in Singapore's history.

From 10am on Wednesday, the first day of the lying in state, the authorities have had to change their plans in reaction to the unceasing flow of people.

Originally scheduled to end at 8pm, the viewing became a round-the-clock affair, and public transport services were extended as well.

Organised groups were no longer allowed to skip the queue, and mourners were asked to speed up past the casket instead of stopping. Priority lines birthed priority lines as the elderly, disabled and the very young showed up in force.

But the sheer numbers meant that there was inevitable chaos, especially in the priority queue on Thursday night.

By early yesterday morning, barricades had extended the priority queue to six times its length to aid the flow, and a new filter was created for those in wheelchairs and strollers.

The line abated in the late morning but swelled again from the late afternoon yesterday and through the night.

Inside Parliament House, global grandees such as former Indonesian presidents Megawati Sukarnoputri and Susilo Bambang Yudhoyono numbered among the mourners.

Opposition veteran Chiam See Tong came and, despite his political differences with Mr Lee, he said: "Singapore is very lucky to have Mr Lee as her first Prime Minister."