Yesterday was a time for him not just to reflect and pray, but also to gather with old friends again at a mosque where they grew up.

The distinctive yellow-and- green Masjid Petempatan Melayu, located in Sembawang, is among the last "kampung" mosques remaining in Singapore.

Built in the 1960s, it served as a meeting point for Muslims who lived in nearby villages.

"Those were the good old days," Mr Ikhsan said with a smile. 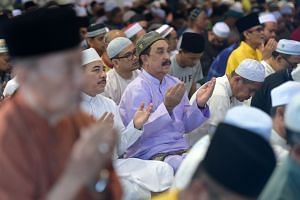 The men were among some 850 congregants at the mosque yesterday celebrating Hari Raya Haji, also known as Aidil Aidha or the feast of sacrifice. It marks the end of the haj pilgrimage to Mecca.

Muslims observe the event with morning prayers and the sacrificial slaughter of livestock, or korban.

Masjid Petempatan Melayu is one of the 25 korban centres this year. A solemn prayer session gave way to hustle and bustle as people enjoyed their morning meal together.

Some 150 sheep were sacrificed during the korban ritual at the mosque. The meat was then distributed to congregants and 40 people with disabilities.

Earlier this week, Singapore received 3,700 sheep from Australia for the korban rituals. The price for each Australian sheep was set at $485 - $5 less than last year.

Those who "do not respect the law or rules of living in a society" can "cause destruction and long-term negative effects" in their bid to make changes or improvements, he said.

He also emphasised the need for everyone to work together and improve the community's quality of life, instead of getting into matters that divide society.

Joining the congregants yesterday was the Minister for the Environment and Water Resources, Mr Masagos Zulkifli, who helped distribute food to them after prayers.

Mosque chairman Amin Abdul Latip noted that watching the older folk chat over their meals had reinforced the sentimental value of the "kampung" mosque.

"It was for the Malays, many of whom were fishermen, as this mosque is near the sea," he said.

That is why the mosque remains so precious to him as well as to others who once lived in the kampungs in Sembawang.

"I know this place so well," said Mr Ikhsan fondly. "I even know the rubber tree in this mosque compound, which is older than I am."

A crowd gathering for the morning prayer session to mark Hari Raya Haji at the Masjid Petempatan Melayu Sembawang mosque yesterday. Some 850 congregants were there for prayers and the korban ritual, where 150 sheep were sacrificed. Some 3,700 sheep were received by 25 korban centres in Singapore.