SINGAPORE - Marine Parade Town Council is stepping up preventive lift maintenance in its ward following an accident at Tah Ching Road, near Jurong Lake, where an elderly woman's hand was severed in a lift.

Minister for Social and Family Development Tan Chuan-Jin, who is a Member of Parliament for Marine Parade GRC, said in a post on Facebook that the town council is conducting "preventative maintenance" of their lifts in addition to their regular checks.

Their engineers have also begun checking all the lift sensors in the constituency.

Mr Tan wrote: "My Town Council colleagues have updated me that they have already stepped up on preventive maintenance of our elevators on top of the regular checks they perform.

"Since yesterday, the engineers have also begun doing checks on all the lift sensors in Marine Parade GRC."

Madam Khoo Bee Hua, 85, was walking her dog on Friday morning when her left hand was caught in the lift. 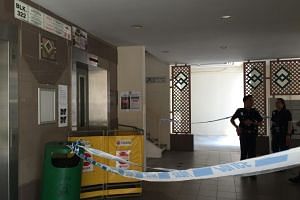 The widow's hand was found outside the lift by Singapore Civil Defence Force (SCDF) rescuers, who also had to prise open the doors to get her out.

Experts told The Straits Times on Friday that the mishap could have been caused by outdated sensors on the doors of the 19-year-old lift.